Home » About Us  » Centers of Excellence  » Bioethics Center  » About the Center 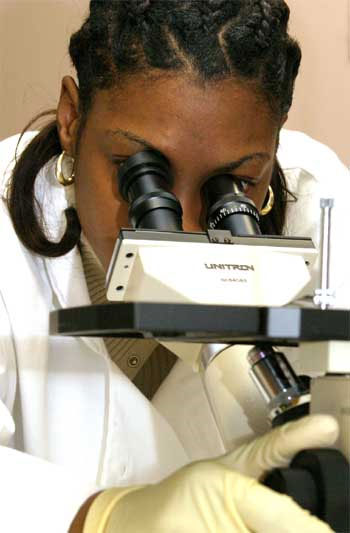 This is the nation's first bioethics center devoted to engaging the sciences, humanities, law and religious faiths in the exploration of the core moral issues which underlie research and medical treatment of African Americans and other underserved people. The official launching of the Center took place two years after President Clinton's apology to the nation, the survivors of the Syphilis Study, Tuskegee University, and Tuskegee/Macon County for the U.S. Public Health Service medical experiment.

"The launching of this Center marks a turning point in a history plagued by abuse and abandonment, and we have the opportunity to address and ameliorate the terrible legacy of the U.S. Public Health Service Study," said Tuskegee University President, Dr. Benjamin F. Payton. "We are pleased to be able to play such an important role in this critical transition, and to continue the University's longstanding tradition of providing innovative health care solutions from an African American perspective."

From 1932 to 1972, the U.S. Public Health Service conducted a study involving syphilitic African American men from rural Macon County, Alabama. No white men were included in the study. Over the course of 40 years, scientists tracked the progression of the disease in the participants without ever telling them that they had syphilis or informing them of treatment options -- even after penicillin had been proven to be a quick and effective cure. In fact, the participants were actually prevented from receiving treatment. The study halted only after an Associated Press reporter exposed the unethical methods being employed.

In his public apology May 16, 1997, President Clinton called the study "something that was wrong -- deeply, profoundly, morally wrong -- to our African American citizens. I am sorry that your Federal Government orchestrated a study so clearly racist."

The President announced during his apology the award of a $200,000 grant to Tuskegee University to initiate plans for a National Center for Bioethics in Research and Health Care. Since that date, more than twenty million dollars in grants and pledges have been made to Tuskegee University to help establish and operate the Center. Ten million of these dollars have been given to the Center, to be used over a five year period by the Centers for Disease Control and Prevention (CDC).

For many African Americans, the Syphilis Study heightened longstanding suspicions of the U.S. health care system and exacerbated fears of medical exploitation. Today, more than a quarter of a century after the study was halted, apprehensions still linger. Too many African Americans avoid participating in important clinical trials, refrain from donating blood or signing up as potential donors, and even refuse routine medical care, including treatment for HIV.

"The entire history of health care in the United States has been shamefully blighted by a long series of racial inequalities," said Dr. Marian Gray Secundy, the first Director of the Center. "As a result, a legacy of distrust has been handed down from one generation to the next. But this Bioethics Center bears great hope. It takes us to the critical next step in changing the course of history for people of color."

"Tuskegee University serves as an ideal place to house this center, both professionally and symbolically. The center will stand as a testament to those who suffered so unjustly in the name of science."