Home » About Us  » History and Mission

We should give credit to George Campbell, a former slave owner, and Lewis Adams, a former slave, tinsmith and community leader, for their roles in the founding of the University. Adams had not had a day of formal education but could read and write. In addition to being a tinsmith, he was also a shoemaker and harness-maker. And he could well have been experienced in other trades. W. F. Foster was a candidate for re-election to the Alabama Senate and approached Lewis Adams about the support of African-Americans in Macon County.

What would Adams want, Foster asked, in exchange for his (Adams) securing the black vote for him (Foster). Adams could well have asked for money, secured the support of blacks voters and life would have gone on as usual. But he didn’t. Instead, Adams told Foster he wanted an educational institution - a school - for his people. Col. Foster carried out his promise and with the assistance of his colleague in the House of Representatives, Arthur L. Brooks, legislation was passed for the establishment of a "Negro Normal School in Tuskegee."

A $2,000 appropriation, for teachers’ salaries, was authorized by the legislation. Lewis Adams, Thomas Dryer, and M. B. Swanson formed the board of commissioners to get the school organized. There was no land, no buildings, no teachers only State legislation authorizing the school. George W. Campbell subsequently replaced Dryer as a commissioner. And it was Campbell, through his nephew, who sent word to Hampton Institute in Virginia looking for a teacher.

Booker T. Washington got the nod and he made the Lewis Adams dream happen. He was principal of the school from July 4, 1881, until his death in 1915. He was not 60 years old when he died. Initial space and building for the school was provided by Butler Chapel AME Zion Church not far from this present site. Not long after the founding, however, the campus was moved to "a 100 acre abandoned plantation" which became the nucleus of the present site.

Tuskegee rose to national prominence under the leadership of its founder, Dr. Washington, who headed the institution from 1881 until his death at age 59 in 1915. During his tenure, institutional independence was gained in 1892, again through legislation, when Tuskegee Normal and Industrial Institute was granted authority to act independent of the state of Alabama.

Dr. Washington, a highly skilled organizer and fund-raiser, was counsel to American Presidents, a strong advocate of Negro business, and instrumental in the development of educational institutions throughout the South. He maintained a lifelong devotion to his institution and to his home - the South. Dr. Washington is buried on the campus of Tuskegee University near the University Chapel. 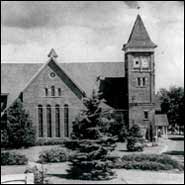 Robert R. Moton was president of Tuskegee from 1915 to 1935. Under his leadership, the Tuskegee Veteran’s Administration Hospital was created on land donated by the Institute. The Tuskegee V.A. Hospital, opened in 1923, was the first and only staffed by Black professionals. Dr. Moton was succeeded in 1935 by Dr. Frederick D. Patterson. Dr. Patterson oversaw the establishment of the School of Veterinary Medicine at Tuskegee. Today, nearly 75 percent of Black veterinarians in America are Tuskegee graduates.

The fifth president, Dr. Benjamin F. Payton, began his tenure in 1981. Under his leadership, the Tuskegee University National Center for Bioethics in Research and Health Care and the Tuskegee Airmen National Historic Site were launched. The General Daniel "Chappie" James Center for Aerospace Science and Health Education was constructed - the largest athletic arena in the SIAC at the time. The Kellogg Conference Center, one of 12 worldwide, was completed as a renovation and expansion of historic Dorothy Hall.

Tuskegee attained University status in 1985 and has since begun offering its first doctoral programs in integrative biosciences and materials science and engineering. The College of Business and Information Sciences was established and professionally accredited, and the College of Engineering, Architecture and Physical Sciences was expanded to include the only Aerospace Engineering department at an HBCU at the time.

At the time of Washington’s death, there were 1,500 students, a $2 million endowment, 40 trades, (we would call them majors today), 100 fully-equipped buildings, and about 200 faculty. From 30 adult students in a one room shanty, we have today grown to more than 3,000 students on a campus (the main campus, farm and forest land) that includes some 5,000 acres and more than 70 buildings.

Dedicated in 1922, the Booker T. Washington Monument, called "Lifting the Veil," stands at the center of campus. The inscription at its base reads, "He lifted the veil of ignorance from his people and pointed the way to progress through education and industry." For Tuskegee, the process of unveiling is continuous and lifelong.

Tuskegee University is a national, independent, and state-related institution of higher learning that is located in the State of Alabama.  The University has distinctive strengths in the sciences, architecture, business, engineering, health, and other professions, all structured on solid foundations in the liberal arts.  In addition, the University's programs focus on nurturing the development of high-order intellectual and moral qualities among students and stress the connection between education and the highly trained leadership Americans need in general, especially for the work force of the 21st Century and beyond.  The results we seek are students whose technical, scientific, and professional prowess has been not only rigorously honed, but also sensitively oriented in ways that produce public-spirited graduates who are both competent and morally committed to public service with integrity and excellence. 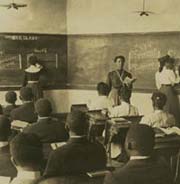 The University is rooted in a history of successfully educating African Americans to understand themselves and their society against the background of their total cultural heritage and the promise of their individual and collective future.  The most important of the people we serve are our students.  Our overall purpose is to nurture and challenge them to grow to their fullest potential.  Serving their needs is the principal reason for our existence.  A major outcome we seek is to prepare them to play effective professional and leadership roles in society and to become productive citizens in the national and world community.  Tuskegee University continues to be dedicated to these broad aims.

Over the past century, various social and historical changes have transformed this institution into a comprehensive and diverse place of learning whose fundamental purpose is to develop leadership, knowledge, and service for a global society.  Committed deeply to academic excellence, the University admits highly talented students of character and challenges them to reach their highest potential.  The University also believes strongly in equality of opportunity and recognizes that exquisite talent is often hidden in students whose finest development requires unusual educational, personal, and financial reinforcement.  The University actively invites a diversity of talented students, staff, and faculty from all racial, religious, and ethnic backgrounds to participate in this educational enterprise.


SPECIAL ELEMENTS OF THE UNIVERSITY'S MISSION

The above three elements of mission, together with certain acts of the United States Congress and the State of Alabama, define Tuskegee University as a land grant institution. Originally focused primarily on agriculture, the University's land-grant function is currently a generic one that embraces a wide spectrum of liberal arts, scientific, and technical and professional programs.

A strong liberal arts program with a core curriculum is provided for all undergraduate students, enabling them to prepare for the mastery of humanities, sciences, technical and professional areas.

The more specific aims of the undergraduate program are to:

The University provides graduate level instruction as well as research and training in post baccalaureate professional fields.  These programs seek to develop in students the ability to engage in independent and scholarly inquiry, a mastery of certain professional disciplines, and a capacity to make original contributions to various bodies of knowledge. Graduate degrees are offered only in selected fields of unusual University strength and opportunity.

Tuskegee University accomplishes its central purpose of developing leadership, knowledge and service through its undergraduate, graduate, professional, research and outreach programs. Through these programs, students are encouraged not only to pursue careers but to be of service to society and to remain active lifetime learners.  The University seeks to instill a robust thirst for knowledge and a vibrant quest for wholesale patterns of personal and social ethics that have philosophical and spiritual depth. In the process, it seeks to help each student develop an appreciation for the finer traits of human personality, the beauty of the earth and the universe, and a personal commitment to the improvement of the human condition.