Tuskegee, Alabama (March 27, 2017) – The Voices for Our Fathers Legacy Foundation (VFOFLF) and the National Center for Bioethics in Research and Health Care (National Bioethics Center) at Tuskegee University will sponsor a Community Day of Healing and Memorial Service, from 6:00 p.m. until 9:00 p.m. CDT, April 3, 2017 at the Chisholm Community Recreational Center, located at 3031 County Road 69 in Tuskegee, Alabama. This commemoration is in honor of the sacrifices of 623 African American men from rural Macon County, Alabama who were victimized and treated as human guinea pigs in the United States Public Health Service Syphilis Study (USPHS) at Tuskegee for forty-years, from 1932-1972. The VFOFLF is the non-profit foundation founded by the descendants of the USPHS Syphilis Study.

The theme for The Community Day of Healing and Memorial Service on April 3, 2017 is “Voices Moving Forward with a Purpose and Action.” This will be the first time the entire community of Macon County will come together since the national apology was given on May 16, 1997. The Community Program, Memorial Service and Solemn Candle Light Ceremony will provide reflections, inspirations and healing offered by descendants of the syphilis study.

“This is the first descendants’ sponsored program to honor the lives of our fathers, grandfathers, great grandfathers and uncles who sacrificed their lives. The occasion will also serve as a reminder, this type of unethical study will never be allowed to happen again. These men without their consent, unknowingly sacrificed their health, some of them lost their lives, while others impacted their families by passing on the disease to them,” said Lillie Head, Co-Chair of the VFOFLF.

“Each year we honor the men who were in the so- called study and their families during the Month of April which is also National Minority Health. This year the Community Day of Healing will be held on April 3rd through April 7th. The annual Public Health Ethics Intensive Course (PHEIC) which, is a component of the Annual Commemoration begins on April 4 and ends April 7th. The PHEIC is designed for the family descendants, students, local community residents, undergraduate and graduate students, health professionals, academicians, faith leaders, ethicists, researchers, and community advocates to discuss pressing ethics issues that challenges local, state, regional, national and global communities will end at 12 noon on April 7th. From 12 noon – 2:00 p.m., the Annual National Apology Commemoration Luncheon will be held at Tuskegee University and Dr. David Satcher 16th U.S. Surgeon General, who actually asked President Clifton for the Apology, will be the keynote luncheon speaker. It is the National Center for Bioethics in Research and Health Care’s distinct privilege and honor to collaborate with the descendants family members of the men who were in the study,” emphasized, Rueben C. Warren, DDS, MPH, DrP.H., MDIV, Professor and Director of the National Center for Bioethics at Tuskegee University.

Registration is open to the public on the Tuskegee University website at  http://www.tuskegee.edu/PHEIC.

Voices for Our Fathers Legacy Foundation (VFOFLF) is a 501(c) 3 non-profit organization established in the Spring of 2014 at the Annual 1997 U.S. Presidential Apology Commemoration which is sponsored by the National Center of Bioethics in Research and Health Care at Tuskegee University. The Foundation is committed to transforming the legacy of the infamous unethical study of the United States Public Health Service Syphilis Study at Tuskegee. The VFOFLF members are descendants of the men who were in the study and supporters of the foundation.

The National Center for Bioethics in Research and Health Care at Tuskegee University (http://tuskegeebioethics.org/) is the only U.S. Presidential mandated bioethics center in the United States. 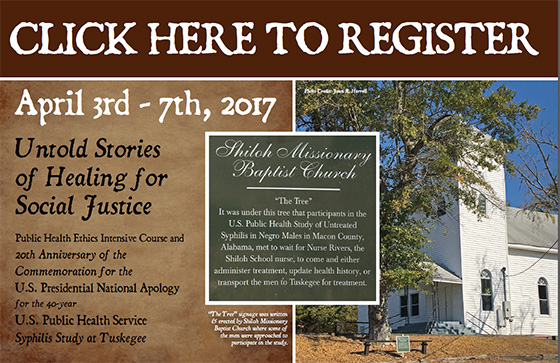 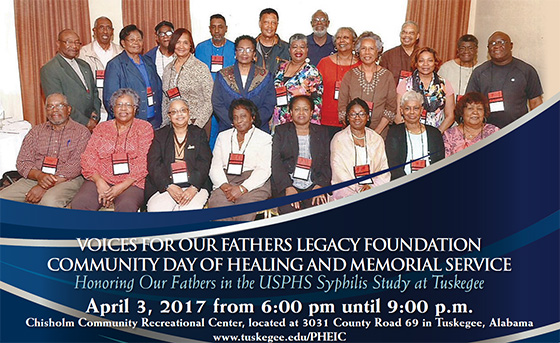