Board announces election of Branner ’90 as alumni trustee

Contacts:
Keith Burrell, Office of the Board of Trustees
Michael Tullier, APR, Office of Communication, Public Relations and Marketing 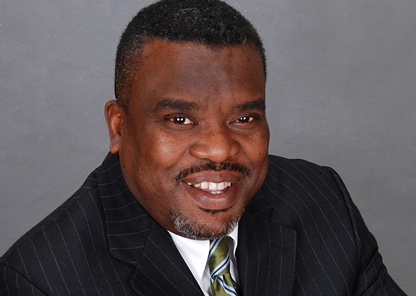 At its fall meeting on Saturday, Sept. 21, members of the Tuskegee University Board of Trustees ratified the election of Clinton Timothy Branner II ’90 as the university’s new alumni trustee. The board’s action makes Branner’s tenure on the board immediate. His term will continue through spring 2022.

Branner, who earned a bachelor’s degree in marketing from Tuskegee in 1990, is senior manager of EEO and human resource compliance for United Technologies’ Carrier Corporation in West Palm Beach, Florida. His career since graduating from Tuskegee has included an emphasis on human resources, diversity and management within companies such as INROADS Inc, Otis Elevator and United Technologies.

“We look forward to Trustee Branner’s service on the Tuskegee University Board of Trustees and the perspective he will bring to our decision-making as an active member of the South Florida Tuskegee Alumni Club,” said Board of Trustees Chair Norma Clayton.

Branner is married to Lisa Russell Branner, a two-time Tuskegee graduate with a bachelor’s degree in biology and doctor of veterinary medicine degree, who currently serves as a veterinarian at VCA Simmons Animal Hospital in West Palm Beach.

“I am an example of why Tuskegee was founded,” Branner noted, referencing his family’s humble roots in the East Tennessee foothills and his status as a first-generation college student. “I was given an education, opportunity and responsibility. I want to continue my service to my alma mater and ensure others coming behind me continue to be afforded the same opportunity to obtain a Tuskegee education.”

Branner fills the alumni trustee seat previously held by Irving W. McConnell, DVM ’74. McConnell will continue his service to the university as a non-trustee member of the Board’s Select Committee for Research, Technology and Innovation.

“As a Tuskegee alumnus who has devoted his professional career to both health-related research and supporting the university, we look forward to Dr. McConnell’s continued counsel on how the university can capitalize on its robust scientific enterprise,” Clayton said. “We also look to his involvement in this role as he models for the board how we can incorporate the service of other alumni in our committees’ work.”

The Tuskegee University Board of Trustees serves as the university’s governing and fiduciary body. Its responsibilities include providing university oversight through its president, as well as helping to advance its engagement with students, parents, alumni and philanthropic donors. The board is comprised of up to 25 voting members, which include five trustees appointed by Alabama’s governor. Board-appointed trustees serve for three years; state-appointed trustees for four years. In addition to the 25 voting trustees, there are several non-voting ex officio members, who include the university’s president, the chair of the Faculty Senate, a student trustee elected by the student body, and Alabama’s state superintendent of education. For more information, visit http://www.tuskegee.edu/trustees.