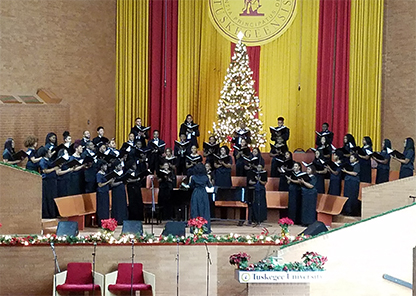 Tuskegee University rang in the holiday season with its annual Christmas Concert and Tree-Lighting Ceremony held on Sunday, Dec. 2 in the University Chapel.

In addition to annual performances by the Tuskegee Brass Ensemble and the Golden Voices Choir, the occasion marked Dr. Lily D. McNair’s first tree-lighting ceremony. As part of the festivities, she and First Gentleman George W. Roberts were on hand for the illuminating of the university’s Christmas tree at the Chapel.

The evening’s musical program began with a prelude of seasonal music by the Tuskegee Brass Ensemble, directed by John Q. Lennard, and an invocation by Dr. Gregory S. Gray, dean of the Chapel.

The world-renowned Golden Voices Concert Choir, under the direction of Dr. Wayne A. Barr and accompanied by Brenda Shuford, performed classical as well as traditional holiday songs. The group received a rousing standing ovation as they provided yet another magnificent performance.

“The Christmas concert is always a highlight of our experiences as a choir, for so many reasons:  the sacredness of the moment as we usher in the Christmas Season; the opportunity to share that moment with the entire Tuskegee community and the region; a time when new choir members really begin to feel a part of something special; a time when the choir bids the graduating seniors farewell, as they are participating in their last Christmas concert!  We also are happy to continue this long standing tradition here at Tuskegee University,” Barr said.

The audience included members of the campus and surrounding community — as well as Barr's parents, Alan and Patricia Barr, who travel each year from Auburn, Georgia to attend the event.

A highlight of the evening included a selection featuring soprano soloist Ciera Caston, a former choir member and 2016 English language arts and literature graduate who currently teaches at Hartman Middle School in Houston. The evening included a variety of student-soloists, as well as group performances by the women’s and men’s glee clubs.

The audience enjoyed participating in the Hallelujah Chorus and the traditional Twelve Days of Christmas. Choir seniors performing in their last Christmas concert waved an emotional goodbye to the audience as the evening concluded with Have Yourself a Merry Little Christmas.

State representative Pebblin Warren, who was unable to attend the concert this year, sent a representative who presented a donation of $12,000 on her behalf to the university, which will benefit both the band and choir programs. This was followed by a challenge gift of $1,000 by Dr. Elaine C. Harrington, a former member of the choir, and a call for additional donations to the Choir Tour Fund.