Joyner ’70 named ‘man of the year’ for professional, philanthropic influence 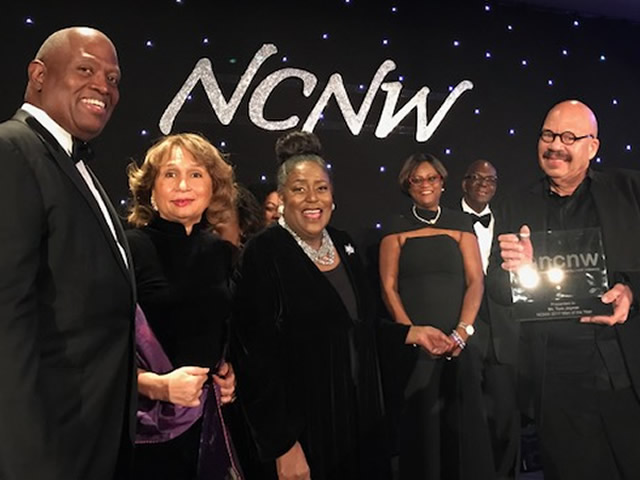 Legendary radio personality, entrepreneur, philanthropist and 1970 Tuskegee University graduate Tom Joyner recently added the National Council of Negro Women’s “Man of the Year” title to his list of many industry and charitable accolades.

The honor, presented at NCNW’s annual gala on Nov. 3 in Washington, D.C., recognizes Joyner for his focus on the community, his impact on the news and entertainment industries, and his philanthropic efforts, which have raised more than $65 million through the Tom Joyner Foundation to support HBCUs and the students who attend them.

Joyner’s No. 1 nationally syndicated urban morning radio show, “The Tom Joyner Morning Show,” airs in more than 105 markets and reaches nearly 8 million listeners. One of the most celebrated and recognized media icons in the country today, Joyner has received the National Association of Broadcasters’ Marconi Award, Billboard’s Best Urban Contemporary Air Personality Award, and the NAACP Image Award, not to mention induction into the Radio Hall of Fame. Impact Magazine’s “Best DJ of the Year Award” was renamed “The Tom Joyner Award” after Joyner’s frequent receipt of the award.

But, it’s not just his professional awards and honors for which NCNW named Joyner its 2017 Man of the Year. Instead, it also is how the radio personality has leveraged his vast influence to inspire and activiate his listeners through social outreach that has made his efforts legendary. Dubbed the “hardest working man in radio,” Joyner has successfully led national awareness campaigns on voter registration, health and education. He also has been a champion in addressing the importance of radio’s advertising reach to the African-American consumer, as well as leading presentations for the Association of National Advertisers and the Radio Advertising Bureau.

Joyner, a native of Tuskegee, Alabama, is one of two sons. His mother was a secretary for the military and his father served as a Tuskegee Airman. He graduated from Tuskegee Institute in 1970 with a degree in sociology and immediately began his career in radio. He started at WRMA (an AM station in Montgomery, Alabama) with later broadcasting gigs in Memphis, St. Louis, Dallas and Chicago. He earned the moniker “The Fly Jock” in the mid-80s when — while simultaneously doing a morning drive-time radio show in Dallas and DJing an afternoon radio show in Chicago — he logged thousands of miles in the sky flying between the two cities on a daily basis. In 1994, through a partnership with ABC Radio Networks, he landed at the helm of “The Tom Joyner Morning Show.” In October 2017, Joyner announced his plans to retire in 2019, ending what will then be a 25-year tenure as the show’s host.

The gala also featured the presentation of NCNW’s Crystal Stair Award — the organization’s highest honor — to actor, advocate and humanitarian Cicely Tyson. Tyson was cited for being a trailblazer in the entertainment industry by portraying strong female characters on stage, screen and television, as well as for her focus on humanitarian and civil rights causes.

The Uncommon Height Award Gala is NCNW’s premier fundraising event. It is hosted to honor an individual or individuals who demonstrate a lifetime of service and achievement as exemplified in the spirit and tradition of civil rights and women’s rights activist Dr. Dorothy Irene Height. For additional information about the event and the organization, www.ncnw.org/calendar-of-events/uncommon-height-award-gala.