As a result of campus closures earlier in the week, the Golden Voices Concert Choir's annual gospel concert, which was scheduled for Friday, Jan. 19, has been postponed until Friday, Jan. 26, at 7 p.m. The invitation is still extended to university students who wish to participate. Interested students should contact Dr. Wayne Barr immediately at wbarr@tuskegee.edu. 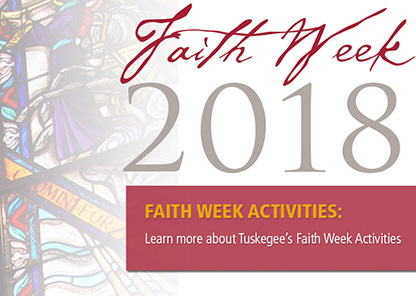 Tuskegee University’s observance of Martin Luther King Jr. Day on Monday, Jan. 15, marks both King’s actual birthdate and the traditional start of the university’s annual “Faith Week.” Events throughout the week will celebrate the university’s religious and cultural diversity — diversity central to King’s dream of justice and equality for all.

“Just as the University Chapel serves as a physical icon in the core of our historic campus, Faith Week serves as a spiritual reminder of the role religion and faith should serve each day in the lives of our students, faculty, staff and community,” said Dr. Gregory Gray, dean of the University Chapel. “Equally so, Dr. King’s voice and vision for courage, justice, compassion and peace will serve to frame our week-long celebration — and resonate throughout our events.”

The university’s Martin Luther King Holiday Observance will take place on Jan. 15 at 11 a.m. in the Chapel. The observance will feature an address by Dr. Edward L. Wheeler, current president of the Interdenominational Theological Center in Atlanta and former dean of the Tuskegee University Chapel. It also will include inspirational readings by student leaders and musical selections performed by the university’s Golden Voices Concert Choir.

Other “Faith Week” activities include:

An Ecumenical Prayer Gathering on Wednesday, Jan. 17 at the University Chapel, beginning at 12 p.m. Students, faculty, staff and community members of all faiths are invited to participate.

An All-University Worship Service on Sunday, Jan. 21 in the University Chapel, beginning at 9:30 a.m. The service will include a message delivered by David Hodge, Ph.D., D.Min, associate director of education for Tuskegee University’s National Center for Bioethics in Research and Healthcare, as well as senior associate editor for its Journal of Healthcare, Sciences, and Humanities.

A performance of the dramatic musical “Seven” on Sunday, Jan. 21 in the University Chapel, beginning at 6 p.m. The musical, directed by Brenda Shuford, Golden Voices Choir accompanist and faculty member of Tuskegee’s Department of Fine and Performing Arts, was performed recently at the 122nd Session of the Central Alabama Conference of the AME Zion Church in Montgomery. Admission is free.

Historically, the Tuskegee University Chapel has been the center for religious, cultural and intellectual dialogue since the historic Tuskegee Institute was founded in 1881. More than 136 years later, the chapel continues to offer a sacred space to critically investigate and celebrate how faith intersects with culture, art, music and public policy in America and around the world.

Drawing inspiration from both his Christian faith and the peaceful teachings of Mahatma Gandhi, Martin Luther King Jr. led a nonviolent movement in the late 1950s and ’60s to achieve legal equality for African-Americans in the United States. While others were advocating for freedom by “any means necessary,” including violence, King used the power of words and acts of nonviolent resistance — such as protests, grassroots organizing and civil disobedience — to achieve seemingly impossible goals. He went on to lead similar campaigns against poverty and international conflict, always maintaining fidelity to his principles that men and women everywhere, regardless of color or creed, are equal members of the human family.

“It is a day of interracial and intercultural cooperation and sharing. No other day of the year brings so many peoples from different cultural backgrounds together in such a vibrant spirit of brother and sisterhood,” she said. “Whether you are African-American, Hispanic or Native American, whether you are Caucasian or Asian-American, you are part of the great dream Martin Luther King Jr. had for America. This is not a black holiday; it is a peoples’ holiday. And it is the young people of all races and religions who hold the keys to the fulfillment of his dream.”