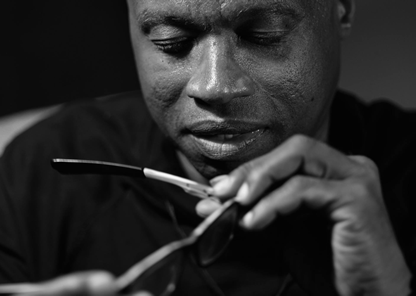 Tuskegee University’s March 14 Lyceum Series event will double as the 23rd Annual Ellison Lecture, hosted by the College of Arts and Sciences’ Department of Modern Languages, Communication, and Philosophy. Scheduled for 3 p.m. in the Brimmer Hall Auditorium, this year’s lecture will feature award-winning poet and Birmingham native, Dr. Randall Horton.

Currently an associate professor of English at the University of New Haven in West Haven, Horton earned a bachelor’s degree in English at the University of the District of Columbia, an M.F.A. in poetry from Chicago State University, and a Ph.D. in creative writing from SUNY Albany. He is a three-time Cave Canem Fellow, a member of the Affrilachian Poets, senior editor at Willow Books (an independent literary press he co-founded in 2006), and a Poet-in-Residence for Washington, D.C.-based Civil Rights Corps, an organization dedicated to challenging systemic injustice in the American legal system.

His most recent collection of poetry, "Pitch Dark Anarchy," was published in 2013 by Triquarterly/Northwestern University Press. His previous poetry collections include “The Definition of Place and The Lingua Franca of Ninth Street.” He is a recipient of the Gwendolyn Brooks Poetry Award and Bea Gonzalez Poetry Award. He also received a National Endowment of the Arts Fellowship in Literature, and most recently, and the GLCA New Writers Award for Creative Nonfiction for “Hook: A Memoir,” published by Augury Books/ Brooklyn Art Press in 2015.

Horton is on the Advisory Committee of Pen America’s Pen Prison Writing Program and is a member of Kappa Alpha Psi Fraternity, Inc. He also is a member of the experimental performance band “Heroes are Gang Leaders” that continues the legacy of Amiri Baraka. The group’s most recent performances include Berlin JazzFest, Crossing the Border Festival in The Hague; Jazz Jantar in Gdansk, Poland; and Sons De Hiver Jazz Festival in Paris, France. In 2018, the group received the American Book Award in Oral Literature for its work on Flukum, a tribute to the poet Etheridge Knight.

In addition to celebrating the literary legacy of Ralph W. Ellison along with an illustrious cadre of past Ellison Lecturers that include Natasha Trethewey, Kevin Young, Haki Madhubuti, Houston R. Baker, Trudier Harris and Arnold Rampersad, this year’s Ellison Lecture also commemorates the Alabama Bicentennial. It also is part of the newly awarded National Endowment for the Humanities grant entitled “Literary Legacies of Macon County and Tuskegee Institute: Zora Neale Hurston, Ralph W. Ellison and Albert Murray,” administered by Dr. Adaku Ankumah, principal investigator, and Dr. Rhonda Collier and Dr. Zanice Bond, co-directors — all of the Department of Modern Languages, Communication, and Philosophy.

Following Horton’s lecture and book signing, the official kick-off for the NEH Literary Legacies Grant will be held at Tuskegee University’s Legacy Museum. It will include the unveiling of the “Soul of Zora: A Literary Legacy through Quilts Exhibition,” featuring nine quilts inspired by Harlem Renaissance writer and Alabama native, Zora Neale Hurston.

The university’s remaining Lyceum Series programs this spring is scheduled for Saturday, April 6, when Dr. Paul Kwami, director of choral activities at Fisk University, will serve as the 2019 Dawson Institute Lecturer. Kwami’s 1 p.m. lecture will be followed by the Dawson Institute Concert at 6 p.m. in Logan Hall.

Lyceum Series events are free and open to students, faculty, staff and others in the community who wish to attend. For more information about the series and updates on future presenters, visit www.tuskegee.edu/lyceumseries.