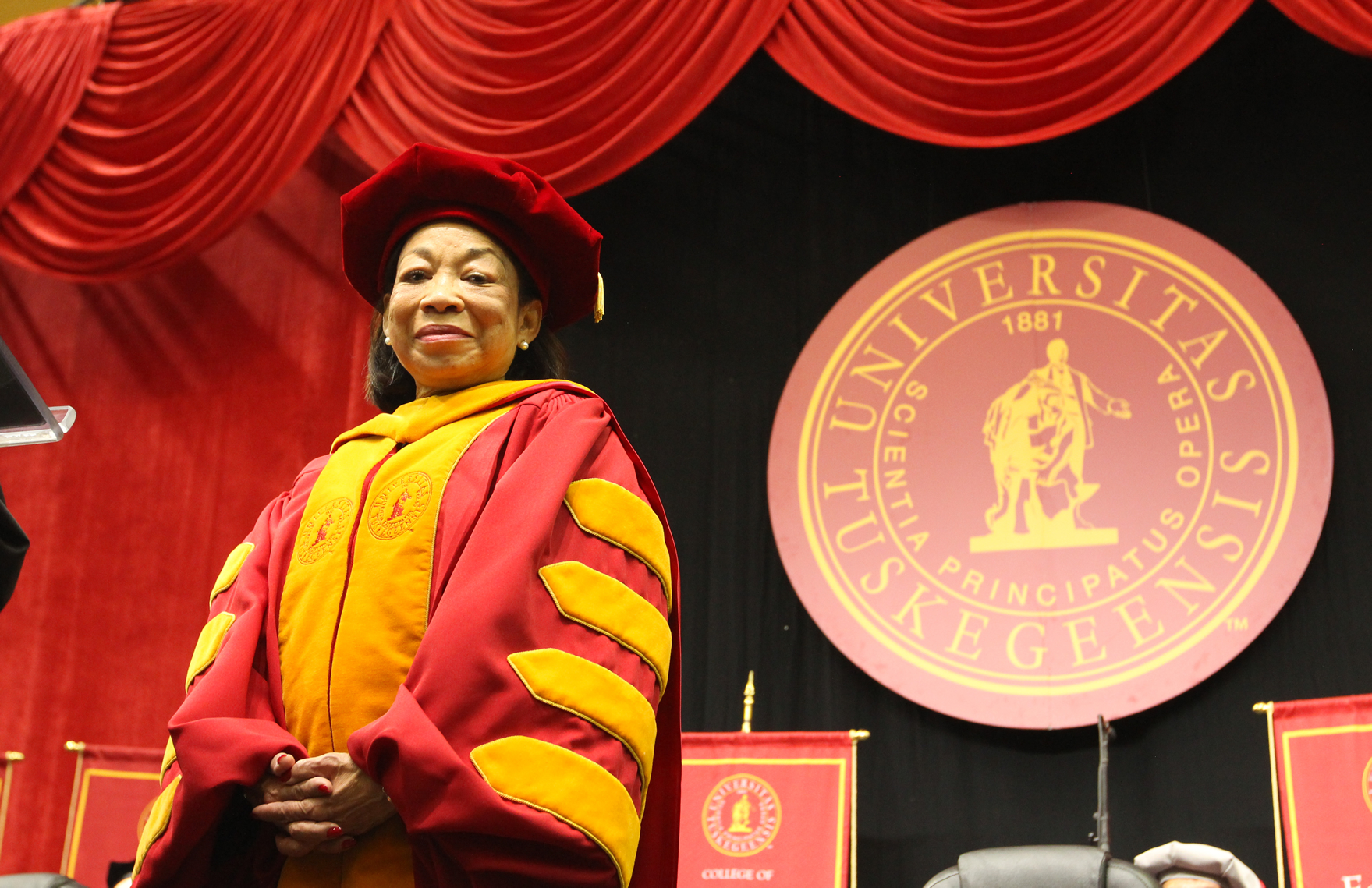 Note: video from the Friday, March 15 Inaugural Convocation and Investiture Ceremony will be published to this page and to the university's YouTube channel following final production.

Tuskegee University celebrated the formal investiture of Dr. Lily D. McNair, its eighth president — and its first female president — during an Inaugural Convocation and Investiture Ceremony on Friday, March 15. The event, held in the university’s Gen. Daniel “Chappie” James Arena, highlighted its proud past and the many traditions associated with transitions in academic leadership.

Hundreds of well-wishers filled the arena for the ceremony — the highlight of a series of weeklong inaugural events hosted by the university. The processional portion that preceded the ceremony included student and alumni representatives, as well as university faculty, administrators and trustees, and delegates from nearly 40 other colleges and universities.

“Under the leadership of Dr. McNair, I know you’re going to continue to hold your long tradition of excellence and achievement — I have no doubt that you will do great things here,” Jones said. “I can’t wait to see how the school evolves and how Dr. McNair’s contributions will help shape the future for tomorrow’s leaders right here at Tuskegee.”

Sewell added: “A page has turned in the Tuskegee University history — in its 137-year history, a woman is set to lead the university, and I know Mother Tuskegee will be in excellent hands. I am excited to know that Tuskegee has entrusted a valuable, talented, brilliant African-American woman to lead the university in its next future chapter.”

Before giving her inaugural address, entitled “It’s in Our Hands: The Legacy and Future of Tuskegee University,” McNair received the presidential medallion, which includes plates bearing her name and the names of the preceding seven university presidents. She will wear the medallion with her academic regalia during formal university events. She also received a framed copy of the university charter, which first vice chair of the university’s Board of Trustees, Norma B. Clayton, noted will serve as a visual reminder to McNair of the duties entrusted to her. McNair also received an official portrait, painted by university faculty member and artist-in-residence, Ronald McDowell.

“The Tuskegee University legacy embodies the excellence that is reflected in all of our students and faculty — but the future is where we must provide laser focus,” McNair emphasized during her remarks. “In order to prepare for the next generation, we must incorporate new learning tools and processes into everything that we do.

“My commitment to our students, faculty and the entire Tuskegee community is rooted in my belief that Tuskegee offers an unparalleled education — with a unique perspective, one connected to our historical value and virtues,” she continued.

While her inauguration marks a new era for the university, McNair is mindful of the tradition of leadership she will perpetuate as its president.

“I’ve learned several lessons in my time here at Tuskegee, including the importance of courage, just as our visionary founder and early leaders had,” she said. “Booker T. Washington had the courage to speak the truth, the courage to establish a school for freed slaves, and the courage to recruit students and raise funds by forming partnerships during the 19th century. When we consider what he accomplished to establish Tuskegee University, it is nothing short of miraculous.”

McNair was appointed the university’s eighth president in May 2018 and began service on July 1, 2018. Prior to her appointment, she served as provost and senior vice president for academic affairs at Wagner College — a private college of 2,200 students located on New York City’s Staten Island. A clinical psychologist by training, McNair’s higher education career includes other academic, research and executive appointments at Spelman College, University of Georgia, the State University of New York at New Paltz, and Vassar College.