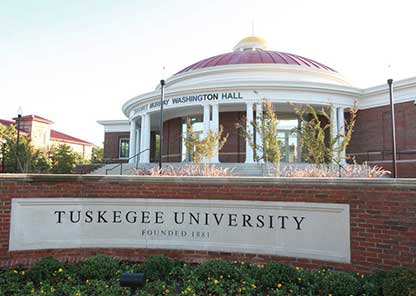 On June 15, the Southern Association of Colleges and Schools Commission on Colleges (SACSCOC) announced it has lifted the warning status previously placed on Tuskegee University. While this announcement reverses and fully lifts the accrediting body’s warning imposed on the university two years ago, the university had remained fully accredited throughout this entire monitoring period.

SACSCOC is the recognized regional accrediting body for nearly 800 degree-granting higher education institutions — regardless of its public, private or for-profit status — Alabama, Florida, Georgia, Kentucky, Louisiana, Mississippi, North Carolina, South Carolina, Tennessee, Texas and Virginia, as well as Latin America. The 77-member commission, backed by teams of peers who visit and monitor institutions, has nearly 100 standards by which member schools are assessed to gain accreditation, and reassessed every 10 years to maintain accreditation.

In June 2015, SACSCOC issued a warning to Tuskegee University regarding concerns for institutional effectiveness and financial stability. SACSCOC’s recent decision to remove its previously issued warning validates the university’s efforts since that time to remedy those observations.

“Tuskegee University has made tremendous financial strides and enhanced its governance and oversight during the past two years,” said John Page, chairman of the university’s Board of Trustees. “Working together, President Johnson, trustees, administrators, faculty and staff reduced the university’s cumulative debt by $20 million, increased its cumulative operating surplus by more than $17 million and increased enrollment by 3.5 percent. I expect even greater advances in these areas, including research and innovation, under Dr. Charlotte Morris’ upcoming tenure as interim president.”

The university also conducted a number of faculty and administrator development workshops to address SACSCOC-observed deficiencies in institutional effectiveness and student-learning outcomes.

Although the university’s fiscal health was SACSCOC’s concern in its last monitoring report, Tuskegee’s academic and degree offerings were never called into question. In fact, in December 2016, SACSCOC approved Tuskegee’s proposed online degree program in nursing, which expanded its online offerings to three. The university currently offers an online master of science in environmental science and a master of science in environmental management, in addition to its newest online program in nursing.

“I look forward in my capacity as interim president to continuing progress toward achieving the goals of the university’s five-year strategic plan, which our trustees adopted in 2015,” Morris said. “Our team of administrators, faculty and staff remain committed to continuing our strategic focus on creating a student-centered culture, integrating modern academic approaches, managing resources effectively, increasing enrollment, and expanding private philanthropy.”

Contact the Southern Association of Colleges and Schools Commission on Colleges at 404-679-4500 or visit www.sacscoc.org for additional information about accreditation.