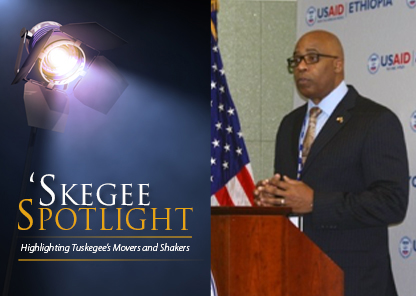 Anthony E. Amerson ’90 says he credits his upbringing in the City of Tuskegee and pledging the Lambda Epsilon chapter of Omega Psi Phi Fraternity, as a model for understanding life’s challenges.

THE MAKING OF A ‘TUSKEGEE GENTLEMAN’

Amerson’s love for Tuskegee came at an early age as a native of Tuskegee and a second-generation Tuskegeean. Amerson studied in the Andrew F. Brimmer College of Business and Information Science and received his bachelor’s of science in accounting. He says he’s always valued the love the university has shown him and treasures Mother Tuskegee’s commitment to family and strong cultural ties.

Currently, he serves as a foreign service officer with the United States Agency for International Development (USAID) and has been with the agency for nearly eight years. Some of his responsibilities include implementing foreign assistance programs and funding by negotiating  and executing contracts, handling cooperative agreements, and  facilitating infrastructure and educational activities around the world.

“I am living my professional dream and relish any platform to profess my good fortune,” said Amerson. “Since the start of my tenure with the agency, I have personally awarded contracts and grants totaling more than $331 million to further USAID’s global mission of eradicating extreme poverty while promoting resilient and democratic societies,” he explained.

“As research has shown, many of the globe’s failing states become ‘magnets’ for extremist organizations to take refuge and operate,” he noted.

He broaches the idea that the reason failing states are attractive to extremist organizations is due to their inability to provide basic services to its citizens.

“I believe that providing development assistance is both far cheaper and most cost-effective than the use of military power for promoting stability,” he emphasized. “Once you place military boots on the ground in a country or region, you assume responsibility for reconstructing its nation, no matter how long that takes.”

No matter the distance, Amerson says his love for Tuskegee runs deep, and he’s always looking for ways to impact the campus and community. Currently, Amerson is working on a project that honors his late father, Sheriff Lucius D. Amerson  –– the first black sheriff elected in the south since reconstruction in Macon County. Amerson says for him, he learned much from his father, including to dream big.

“If one focuses intently enough good things are bound to happen,” he said.

Because of his father’s legacy, Amerson says he wanted to show the riveting experiences his father faced as an officer in the then-racially segregated Macon County. To honor his father, Amerson donated artifacts to the National Law Enforcement Museum in Washington, D.C.

“The museum is scheduled to open October 13 and will offer visitors a one-of-a-kind experience — the opportunity to walk in my father’s shoes and see what it’s like as a law enforcement officer,” noted Amerson.

The museum will feature a world-class collection of more than 20,000 artifacts that depict American law enforcement in the context of historic events and pop culture.

“The museum will also display personal artifacts from my dad, such as his uniforms, badges, sunglass and Colt 45 revolver,” he added.

Amerson says he wants to encourage all Tuskegee students to be marketable in every way possible and focus on learning a craft.

“Learn your craft to the point where you are a subject-matter expert at what you do,” he challenged. “When you’re an expert in your field, you will gain a confidence that others will have to seek out.”

Amerson says his deep roots are forever embedded in Mother Tuskegee, and he can’t wait to return home again.