The Office of Communications, Public Relations and Marketing regularly shines its "'Skegee Spotlight" on employees, students and alumni who help make Tuskegee University "the Pride of the swift-growing South." This week's Spotlight was contributed by intern Mia Hickman. 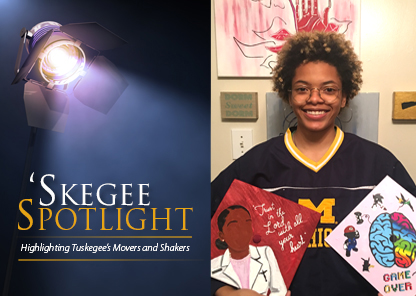 Asia Johnson, a native of Detroit, Michigan, says despite being 842 miles away from home, she wasn’t going to let distance stop her from attending Tuskegee University. The third-year architecture major says she fell in love with Tuskegee as a senior in high school.

When entering through the university’s “Lincoln Gates,” Asia recalled being overwhelmed with joy and excitement.

“The campus had more than just a beautiful landscape — you could tell it was rich in culture, history and love,” she explains.

Asia says that very moment solidified Tuskegee as her university home-away-from-home for the next five years.

When selecting a major, Asia says it was her passion for art and her love for math that guided her toward studying architecture.

“I chose architecture because I thought it would be a good combination of math and art — I’ve been into art for as long as I can remember,” Asia recalls. “For me, art is more than just drawing on a piece of paper. Art is my savior — when I don’t know how to express myself with my words, I am able to do so through my art.”

Asia has turned her artistic passion into a profitable business by designing many of the mortarboards seen during Tuskegee’s recent graduation ceremonies.

“The idea came last year when a graduating senior took notice of my work. I remember him saying that he would occasionally see my architecture design buildings, drawings and paintings, so one day he asked me if I had ever painted a grad cap,” she explains. “After designing his mortarboard, I posted my work on social media, and to my surprise, I received many positive comments and others asking for my services.”

Asia says each grad cap takes about a week to create: one day to sketch, followed by two to three days of painting and another day to let it dry. This year, six members of the class of 2019 sported Asia’s one-of-a-kind designs — several of which were three-dimensional.

Looking toward the future

After completing the five-year architecture undergraduate program, Asia plans to pursue a master’s degree in architecture and become a licensed architect.

“Less than 2% of black women in architecture are licensed, and I want to be the one who can later inspire more women of color to consider this type of career,” Asia says.

Ultimately, she aspires to teach architecture and educate future generations or architectural professionals.

“Tuskegee has helped me realize and appreciate the person I have become,” she notes. “There are people here who see things in you that we sometimes overlook ourselves. Being in this environment, filled with so many of my peers who look like me is like an extra push, and that makes me want to continue to be the best.”