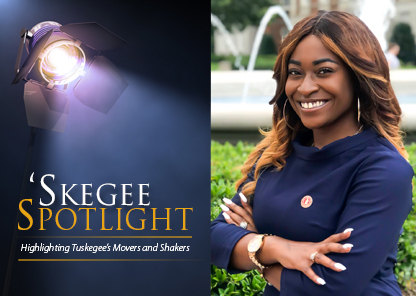 Senior chemistry major Chigozie Joi Chinakwe says she’s taking charge of her future as an aspiring science researcher — and her time is now.

Chinakwe, a Montgomery, Alabama, native, says she was first introduced to Tuskegee University by four of her aunts — each of whom attended Tuskegee. She credits their legacy with setting the tone for her, and because of that, she knew attending Tuskegee would be the next step to her future career.

“Coming from a line of Tuskegee graduates was significantly important to me,” Chinakwe explains. “Growing up, I can remember my aunts recalling their experience as undergraduates. It was amazing to her their stories, and how much of an impact Tuskegee played in their lives.”

Chinakwe says attending Tuskegee has prepared her for life beyond the campus’ gates.

“Mother Tuskegee has not just molded me into a young black professional, but she has helped me to become a woman who is well rounded and can adapt to any situation that is presented,” she notes. “Mother Tuskegee has also taught me the value of having good character, as this is an important virtue in life.”

Pursuing a love for science

Chinakwe, whose parents are both chemists, says she never thought she would fall in love with science, simply because she’s been around it much of her life.

“Both of my parents are chemists, so naturally growing up, I never wanted to be a scientist,” she recalls. “But, while in high school, I took my first chemistry class and that’s where I simply fell in love with it.

This past summer, Chinakwe interned with the Alabama Plasma Internship Program in partnership with the University of Alabama. While there, she studied the field of emerging plasma energy in Alabama.

Striving to positively influence others

Chinakwe says she’s always striving to be of great influence to her peers and to set an example for those who are watching.

“I influence others by being the best version of myself – that comes with being genuine, making jokes, and encouraging others to be themselves unapologetically,” she notes. “Knowing that I can make a difference in a person’s life motivates me the most. Just knowing that a simple laugh, hug or word of encouragement can inspire someone or make their day better is what keeps me going.”

That also means sharing advice with new students beginning their studies at Tuskegee.

“Embrace Mother Tuskegee and everything she has to offer,” she advises. “The university is such a magical place — once you allow her to nurture you. You will never get to experience anything like this again, so take advantage of every opportunity.”