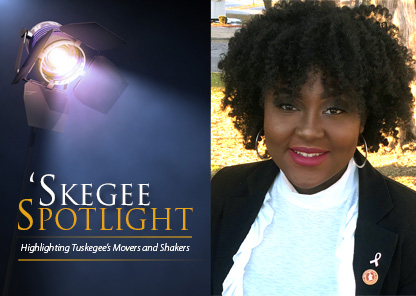 From the big city to the small town, graduating senior Courtney Peavy from Houston, Texas, has managed to blend in and make Tuskegee University worth her while.

For Peavy, Tuskegee University wasn’t on her radar until after she made one last college road trip tour with her parents. After seeing the campus, and learning about scholarship opportunities and that various academic majors would be available to her, she decided Mother Tuskegee would be the perfect fit.

“I’m a daddy’s girl, and I would say that my father persuaded me to attend Tuskegee,” she said. “Before our initial visit, he described the university as profound and powerful, but when we arrived, it was the beauty of the campus that drew me in.”

“After attending a predominately white public high school, I did have an interest in attending a PWI college — mainly because they were the ‘it’ schools, and there were quite a few colleges to choose from throughout Texas,” Peavy recalled. “However, my mom suggested I apply to at least one HBCU –– and in my opinion, that HBCU needed to be among the top-ranked HBCUs in the country.”

Peavy said after touring a host of universities, she quickly realized the difference in atmospheres between PWIs and HBCUs.

“I felt more connected at Tuskegee –– the culture and dynamic roots of Tuskegee made me feel like I belonged here,” she said.

Peavy, a dual English and communication major, says since her transition to small-town life in Tuskegee, she has learned so much about herself — including being true to herself no matter what.

“You have to stand firm in exactly what you believe in, and I’m experiencing and uncovering more and more about myself daily,” Peavy explained.

Peavy says one of the biggest transitions she’s had to make was relying on others for transportation.

“It’s different not having a car with you on campus, which means you have to rely on the transit or ride with close friends to go shopping at the malls in Montgomery or Auburn. However, through this journey, I’ve learned to adjust fast to available conveniences and better manage my time,” she said.

Peavy says since being at Tuskegee, several opportunities have come knocking on her door — including the opportunity to travel abroad with the Tuskegee University Global Incite program.

“I can’t imagine being able to take advantage of such an opportunity had I not been at Tuskegee. Because of the relationships and partnerships our faculty and alums make on our behalf as students, we can attend research and educational trips that offer us a global experience,” she noted.

Peavy says that because of Dr. Rhonda Collier, director of the Tuskegee University Global Office, and alumna Carmen Fields, she was able to take a two-week research trip last summer to South Africa to research social entrepreneurship within the country’s youth developmental program.

“Tuskegee has afforded me so many memories that I’ll forever be able to carry, including winning first place in the Southern African research studies conference at Auburn University, based on my experience and visit during my study abroad research trip,” she explained.

Looking toward the future, Peavy plans to continue reaching for the stars and being a role model for her twin brothers.

“I want my brothers and my peers to know that they should always seize the opportunity at hand, no matter how it’s packaged,” she said. “The door is always open, but you have to be willing to work hard for it.”

Late this year, Peavy will also have another chance to participate in an upcoming abroad experience, as she will travel to Israel as a participant in the Jewish National Fund's Caravan for Democracy Student Leadership Mission.

“I’m excited about my next research trip, as this will also guide me toward what I ultimately want to pursue after graduation,” noted Peavy. “I want to continue exploring different countries and giving back through service. I’d even be happy if I can land an English teaching assistantship in Kenya or Rwanda. That would allow me to tap into my love for education –– as this is something that’s not widely available to their students.”

Peavy says she has so many plans following graduation, including applying to the Fulbright U.S. Student Program or serving in a White House Cabinet position.