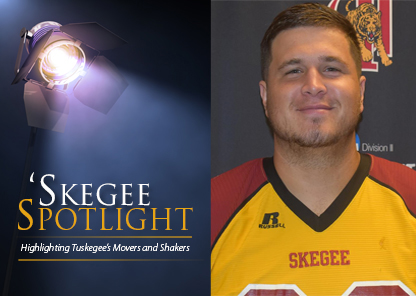 Changing schools can be quite the adjustment for any transfer student, but for Dalton Hall, the transition to Tuskegee University felt like home.

Since transferring from a junior college in Northern California, Hall, a senior communication major from Hartville, South Carolina, says his studies at Mother Tuskegee have been an enjoyable experience.

“Being here at Tuskegee feels way more like home compared to being out west — not to mention I’m a lot closer to my family,” he said.

Hall, currently a member of Golden Tigers Football team, was drawn to Tuskegee because of its athletic program, not to mention its student-to-teacher ratio and small class sizes.

“Tuskegee has a history of being a top NCAA Division II football program. We have earned numerous championships, and that was a big deal for me when selecting the next school that I would attend,” Hall explained.

In 2015, Hall received a football scholarship from Tuskegee to fill the position of kicker and punter.

“I’ve been fortunate to play under the leadership of Coach Willie Slater, who has had such a profound impact on this program,” Hall noted. “Every day, he challenges us to be better than the day before — and do what we’re supposed to do.”

Staying disciplined has been among Hall’s priorities as he manages his time on and off the field.

“Time management is a big deal when you’re a student-athlete. You have to remember that you’re a student first, and that comes before anything ¬–– and then there’s the added pressure of making sure your performing at an optimal level for game day,” he said.

“You get used to it, especially once you become disciplined between 5 a.m. practices, classes, weightlifting class in the afternoon, and trying to maintain a good GPA –– it just becomes part of the territory,” he added.

Hall says what’s worked best for him was finding teachers in advance of the first day of class so he could get to know their teaching styles and see if it matched his learning style.

“I do my research on teachers because I wanted to succeed in every way possible,” he noted. “It’s important to have that connection with them, because juggling 18 credits can become quite overwhelming.”

During the summer break, Hall had a chance to work with One-On-One — a performance football camp designed for athletic professionals, collegiate, and high school kickers and punters.

“At the camp, I had a chance to serve as coach for many of the participants, some of which included NFL kickers and punters, and the camp also allowed me the opportunity to brush up on my own skills in preparation for the upcoming football season,” he said.

Hall says he hopes to one day play in the NFL, however, if that doesn’t work, he says a career in private training will also suit his talents.

“Being at Tuskegee has allowed me to discover what I want to do after graduation, and has pushed me in the right direction,” he added.

Hall says he’s looking forward to another successful football season and seeing all of the supportive students, faculty and alums at both home and away games.