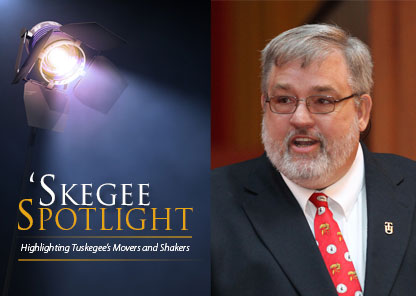 Dana Chandler, known as Tuskegee’s human history book, ensures Tuskegee’s legacy is properly documented, remains consistent and is vital for use today. Chandler serves as the university’s archivist and says the best part of working at Tuskegee is having access to so much material and documents that makes up Tuskegee’s historical legacy.

Chandler says his love for history came about at an early age.

“When I was younger, my father worked for a company that allowed my family the opportunity to travel, so I never had time for friends nor did I develop a place I could call on my own,” he recalled.  “So, I read a lot and one of the first books I read was the World Book Encyclopedia­­— I read it from A to Z and that’s what got me interested in history.”

Chandler says what brought him to Tuskegee was his passion for history. He recalled his first visit to Tuskegee, which was to the George Washington Carver Museum.

“It was at that point that I feel deeply in love with all that Tuskegee offered; its rich historical legacy had some amazing components from civil rights, to medicine, and education, it had everything.”

“I believe because of the passion I’ve developed for Tuskegee, it has filtered over into every aspect of my life as a teacher and a lecturer; its provided me opportunities I wouldn’t have had anywhere else.”

Chandler has been with the university for 13 years, and he says when he first started the archives department need to be organized and cleaned-up, and all documents needed to be put in a particular order so that it could be used.

“Because of former president Dr. Payton’s understanding, and the administration’s help, we were able to do this in just two years,” he noted. “This support was unwavering and from that point I accepted the position as, university archivist.”

Since then, Chandler has worked on numerous projects, including discovering Tuskegee’s “Hidden Figures” and reclaiming the Booker T. Washington microfilm from the Library of Congress.

“Obtaining the microfilm back from Congress was one of the most rewarding projects I’ve worked on,” he said. “Because of our pushing and levering, we received them just a few short years ago.”

Having the records back in Tuskegee’s possession allows people to come Tuskegee to do their research without going through the Library of Congress.

“We have 155 boxes of Washington’s material that no one else has; plus, we have other collections that are tied to him that people don’t think about, so if you want to do research on him and what he was doing while at Tuskegee, you come to us.”

He says working at Tuskegee­­ — and with the significant material that documents its impact on the nation and the world — has truly been amazing.

“Forty-five percent of our hits online come from abroad, and they are looking at the George Washington Carver bulletin that focuses on farming,” he noted. “It’s amazing to see that people in Pakistan, Peru, India, and other nations are looking for ways to make their lives more efficient.”

Chandler takes his position very seriously and guards it with ownership.

“I’m going to be truthful and honest, as well as take ownership to make sure what I receive is guarded in safe keeping. I want people to realize that if they donate to the archives, that it’s truly going to be taken care of, and if they want to see their items 100 years from now, they could,” he said.

The Tuskegee University Archives holds more than 600 historically significant collections, as well as more than a quarter of a million black and white photographs, manuscripts, periodicals and other archival items.

For more information on the university’s archives, visit http://archive.tuskegee.edu/archive.