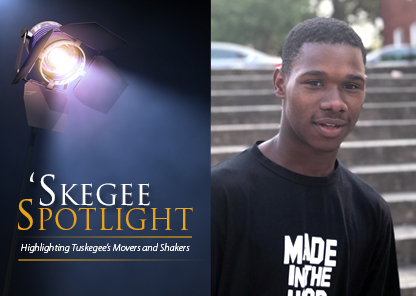 Freshman Darrin Francois had acceptance and scholarship offers from more than 90 colleges and universities to consider, but the New Orleans native chose Tuskegee University for his undergraduate studies.

Francois has a strong desire to succeed; however, what makes the member of the Class of 2022 truly unique is that he was offered more than $3.4 million in scholarships.

“I was admitted to 91 colleges and universities nationwide and was given a scholarship to every single one. I credit my academic background and my high school counselors for assisting me,” Francois said.

Since high school, Francois has earned the nickname “College Cash Magnet,” since he’s been widely famous for this remarkable achievement.

“I think it’s pretty neat that my peers think of me as such a ‘College Cash Magnet,’ but I truly want to encourage them to follow my footsteps toward higher education and to take advantage of the financial resources they are presented with,” he said.

Francois graduated high school with a 4.2 GPA. As a former National Honor Society president, he has plans to pursue a degree in political science at Tuskegee.

“I will be majoring in political science, and I’m thinking about minoring in mass communication because we need more black leaders in media and in government,” he explained. “I hope that one day I can become a congressman for my home state of Louisiana.”

Network for your net worth

Francois says he chose to attend Tuskegee because of the university’s rich history, its family-oriented culture, and the reputation surrounding its academic programs.

“My older sister attended Dillard University in New Orleans, so I felt like I needed to continue the HBCU tradition,” he noted. “I also have epilepsy, so that weighed in on my decision — my mother didn’t want me to travel too far from home.”

Francois says so far, Tuskegee has been “great.” He’s adjusting to his class schedule, meeting new mentors and establishing a routine. In addition to getting acclimated to the university, he plans to become very active in campus organizations.

“I think it’s important to get involved with student and civic organizations because being involved makes you more well-rounded and it helps you learn how to network with your peers,” he added.

Recently, Francois became an author of a tell-all book encouraging students to push beyond their limits and strive for greatness. Right now, he says he is planning to participate in the upcoming freshman class elections.

“If selected as a class representative, I have plans to lead my class by explaining and displaying that being proactive in your school work can take you to the next level,” he explained.

Francois also plans to aide his fellow classmates on which scholarships to apply for and where they can be found. He says he wants to make a major impact on his peers and help them learn how to earn a college degree debt-free. Francois is truly a modern-day pioneer and should be admired for exemplifying and achieving such excellence.