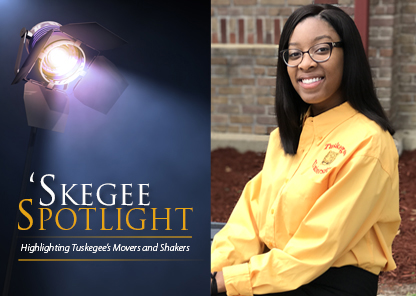 Students today have numerous options to choose from when considering where to earn a degree. To narrow down those options, some students resort to conducting extensive research or creating pros-and-cons lists, but for Dazja Loyd, she says Tuskegee chose her.

Loyd, a senior from Millbrook, Alabama, majoring in psychology, says it was because of her mother’s experience — and the bond she saw between her mother and her mother’s college friends — that made her look forward to attending Tuskegee.

“My mother and her college friends have always shared in many moments and memories — and that’s been inspiring to me,” she said.

That said, Loyd did note that, before settling on Tuskegee, she wanted to branch out and consider other options. That research at first led her to consider another choice, but after watching Tuskegee play for the 2014 SIAC football championship title, she decided to place her bets on Tuskegee.

“My senior year in high school, I had a cousin who insisted that my entire family attend the football championship game,” she recalled. “The environment at the game felt like home, and at that moment I knew I had to attend Tuskegee University.”

Since beginning her studies at Tuskegee, Loyd says she’s made her own memories and college friends. Challenges along the way also have shaped her college experience and readied her for life.

“My time at Tuskegee has not been the easiest, but I am so appreciative of the experience. College sometimes requires you to make something out of nothing, and in my personal opinion, learning to push through adversity has prepared me for life after college the most,” she noted.

For Loyd, having a great college experience meant more than just being involved in civic and social organizations on campus. It has also included starting her own organization, which is committed to giving back to the students at the university. Her organization, My Sister's Keeper, is a program created under the Black Women's Health Imperative, which she brought to the campus in the fall of 2017.”

“Many women feel as if they can do it all by themselves, and that they are always okay. But, we can't do it all by ourselves and we aren't always okay — and that is okay,” she added. “Black women supporting each other is something I feel is vital to society.”

Loyd says her organization has touched the lives of many women on campus, and has enabled her to be an advocate for women’s health.

“Recently, my organization took a trip to Washington, D.C., to attend a policy summit. While representing Tuskegee, we met with several government representatives and voiced our concerns about women’s health initiatives,” she explained. “I’m thankful that I’ll be able to leave this organization here after I graduate. One thing this experience has shown me is that Tuskegee allows for personal growth.”

Loyd says the most rewarding part of attending Tuskegee has been surrounding herself with black excellence. She explained the type of environment Tuskegee offers has nurtured her a "go-getter" spirit.

“Being surrounded by the best forces you to be the best,” she noted. “Because of Tuskegee pushing me beyond my limits, I’ve been able to discover other areas of interest.”

At the end of Loyd’s sophomore year and at the age of 19, she earned her real estate license and she’s recently picked up the hobby of making homemade soaps.

THE BEST IS YET TO COME

Loyd says discipline and networking have been two of the best skills she’s developed throughout her journey.

“I believe that if I leave here with nothing else, I know at the very least that my networking skills are superb, which are essential skills for life after college,” she stated.

Loyd also says, in addition to her experience, her instructors have played a role in her personal growth. One of those mentors has been Dr. Lynn Benson, who teaches in the Department of Psychology and Sociology.

Loyd has advice of her own to share with her fellow students: do not let fear get in the way of setting goals.

“Failure is a part of life. You will not succeed at everything you try, and that is okay; however, don't let failure stop you — allow it to motivate you,” she advised. “My life motto is ‘a candle never loses any shine by lighting another. If the opportunity presents, I am going to help someone achieve their goals.’”