The Office of Communications, Public Relations and Marketing regularly shines its "'Skegee Spotlight" on employees, students and alumni who help make Tuskegee University "the Pride of the swift-growing South." This week's Spotlight was contributed by Simone Amos. 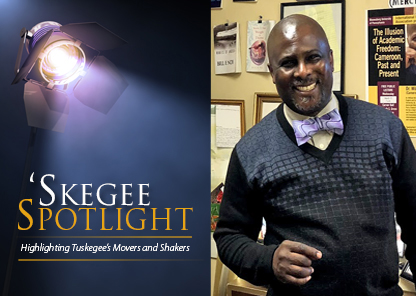 With more than 30 published works and more to come — Dr. Bill F. Ndi has proven himself an asset as an associate professor in Tuskegee’s Department of Communication, Modern Languages, and Philosophy. Ndi brings to his work a “globe-trotting” scholar’s perspective, having experienced an array of educational and teaching experiences around the world.

Born and raised in the British-speaking half of Cameroon, Africa, Ndi has traveled the world obtaining a global education. He began his academic journey at the University of Yaoundé, where he double-majored in both English and French and finished with honors, and later earned a Ph.D. from the University of Paris 8.

“The double-major option involved a very select group of students in the whole nation. We were just a class of 25, representing the best of core values of Cameroon’s bilingualism,” Ndi expalined.

Among his academic specialties dating back to his days as a student is 17th century cultural life. Ndi noted that changes occurring in England at that time had effects throughout the world — and continue to affect the world even today.

Becoming an author was something Ndi strived for since a high school student. Currently, he has published 33 works and contributed significantly to two additional major works.

“The dynamism or the changes that take place in our world drives me to write,” Ndi said. “My books differ in their content but reflect my interdisciplinary and globe-trotting experiences. They are not limited or one-sided.”

He also explained that he targets the “cosmopolitan audience” in the themes of his writing.

“Most specifically, my plays and poems address issues that plague black people around the world. As for my academic or critical work, they address issues of global concern,” he explained.

His plays, such as Gods in the Ivory Towers, have been incorporated into the curricula at several other colleges and universities, and institutions as far reaching as the University of Wisconsin. There, Ndi noted, students featured his play in their end-of-the-year project, eventually taking the play to the stage.

Being drawn to Tuskegee

Ndi’s globe-trotting career has included teaching in countries such as France and Australia, but it was his experience teaching from Booker T. Washington’s Up from Slavery autobiography that turned his sights to teaching at Tuskegee.

“I have a passion for teaching and tying it to history,” Ndi explained. “I started teaching high school and would use Up from Slavery as a monologue for teaching English. I taught excerpts from the book with so much passion that many of my students started referring to me as ‘Booker T.’ So, when I interviewed for a job at Tuskegee University, I knew from there on Tuskegee was the place for me.”

Currently, Ndi teaches English Composition I and II, Technical Writing, and Critical Thinking, along with Creative Writing and many more subjects during his nine years on the university’s faculty. And, through the university’s family atmosphere and his relationships with his students, he’s gained a new nickname: “uncle.”

“What I would want for my own nephews and nieces is the same as what I want for my students,” he said. “I am conscious of the fact that what I have to give is my best. My students desire the best of me, and my best is what they should have.”