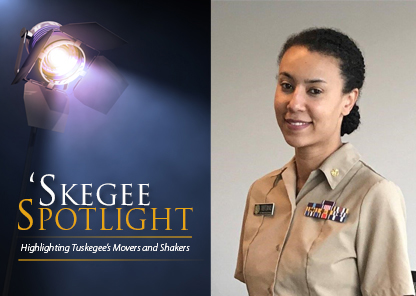 Dr. Kis Robertson Hale, a 2003 alumna who received her doctorate in veterinary medicine, says her experience at Tuskegee University nurtured her career interests in public health.

Hale says she always knew what type of career she wanted to pursue, but attending Tuskegee gave her the motivation and push she needed.

“The veterinary training, I received at Tuskegee exposed me to the clinical realities of the profession, but I found inspiration in being able to study under professors who were well-respected in the field,” noted Hale. “When you are a student and planning on taking an unconventional career path, having role models is very important —Tuskegee provided me with that.”

Currently, Hale serves as a senior executive with the U.S. Department of Agriculture’s Food Safety and Inspection Service (FSIS), where she helps lead a program of almost 300 scientists who advance the agency’s public health regulatory mission. She says as the FSIS’ chief public health veterinarian, she provides expertise and leadership on emerging animal disease issues that impact food safety and human health.

“Because of the knowledge learned at Tuskegee, I know firsthand how to stay true to FSIS’s mission, which is focused on ensuring meat, poultry and other food products are safe, wholesome and accurately labeled.

Hale says her motivation comes from the desire to contribute to something larger and more important than herself.

“Tuskegee helped teach me that drive and resourcefulness can take you far in life. Because of that, I’m grateful that I have a chance to contribute directly to decisions that have a positive impact on the safety of food Americans eat every day,” explained Hale.

In addition to her hard-working spirit, Hale says she’s been grounded by advice from many professors that’s been essential advice in her career. The most memorable advice she received came from a former Tuskegee professor who taught her to always go through the “chain of command” when airing grievances about grading and other classroom issues.

“Many conflicts could be prevented or resolved with direct communication — of course, doing so can be intimidating; this is why we often tend to avoid going to the source of our perceived problems,” she noted. “It takes maturity and strength to not take the easy way out.”

Hale says influence is a by-product of trust, and being a trustworthy person is where leadership starts for her.

“I strive to not only have a sense of trustworthiness, but I also value honesty, integrity and ethics as credible sources of guidance and information,” she said. “When guiding students, I want them to know it’s OK to pursue a career path that differs from their peers — sometimes being the odd ball is advantageous because it means there’s less competition.”

Hale also encourages students to make sure that their career goals and values are aligned and reassess periodically.

“I define professional success as having a job that meets all your needs and most of your wants — it doesn’t necessarily mean making a lot of money, owning your own business, or being in charge of people,” Hale noted.