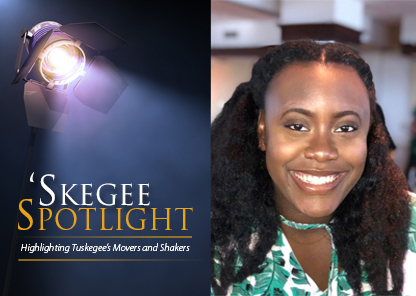 First-year political science major Jayden Graham-White was offered nearly $675,000 in scholarships and accepted into more than 32 colleges and universities; however, the Gulfport, Mississippi, native said choosing Tuskegee was a no-brainer — and turned out to be the best choice for her academic endeavors.

White says her love for achieving the best in education came at an early age, and she began prepping for the ACT in seventh grade.

“On my first attempt at taking the ACT, I scored a 25,” White recalled. “I tried again in ninth grade and scored a 29. I received my final score of 30 in 10th grade, so taking the test early on took a lot of pressure off of me.”

White graduated from a career-prep high school and finished in the top percentile of her class. She maintained a 3.67 GPA, and was a member of the National Honor Society, Mu Alpha Theta and a national competitor in DECA.

Because of her academic achievements, she was offered a Presidential Scholarship to attend Tuskegee University.

“I decided to attend Tuskegee not only because of what was being offered, but because it was the right fit for me,” she said. “My family is full of HBCU graduates –– so I knew I too wanted to attend an HBCU. My mother attended Xavier University in New Orleans, and my grandmother attended Mississippi Valley State University.”

Though White had endless choices for attending a different university, she says she felt more connected to Tuskegee after a former high school coach personally introduced her to head athletic trainer Ricky Hayes.

“I was an athletic trainer in high school, and when I told my former trainer I was attending Tuskegee in the fall, he suggested I work with the sports medicine program on campus,” she explained. “It’s been such a great experience getting a chance to work with the players and travel with them. I’ve had the chance to make a lot of great connections and friendships.”

Unlike the traditional freshman student, White has skipped over the required entry-level college courses and is a junior by credit hours.

White says because of her jump start, she’s been able to focus on her major all while balancing life as a first-year student.

“It’s certainly a different feeling, sometimes being the only freshman in an all-junior or senior class –– I don’t have the chance to study with my freshman friends that I met during orientation, and that sometimes takes away from my academic experience,” she noted. “Despite that difference, my transition to college life has been smooth and my classes are going very well.”

White says, because of her mother’s influence, she’s always been active in a number of academic and civic programs.

“I’ve always been involved in some type of activity, whether it be piano lessons, singing in the choir, or participating in the National Honor Society. I’ve always maintained an active schedule — I’ve never had a chance to slow down, and to this day, I’ve kept the same momentum. It’s more like second nature to keep myself busy,” White explained.

White is active in several on-campus programs, including the Freshman Student Government Association, through which she serves a freshman representative for political science majors, as well as participating as a member in NAACP and a host of other campus organizations.

White says that, though her studies will keep her on campus for two years, she is already setting up plans for after graduation.

“I plan to either attend graduate school or law school. I’ve already spoken with representatives from John Hopkins, Columbia University, Princeton and a few others — I do plan to practice law one day,” she emphasized.

White encourages her peers to always strive to do their best and look for countless opportunities that will make them better.

“My journey was not easy, but it’s definitely paid off –– and it’s made me a better person,” she concluded.