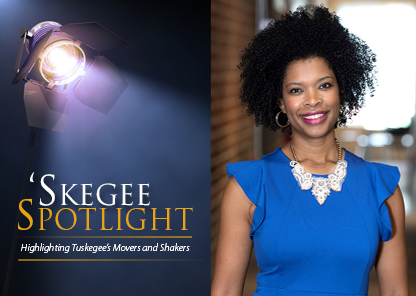 Edwards, who earned a degree in finance, says she has always credited Tuskegee for finding its way into her heart.

“Tuskegee chose me, as I did not actually apply. One day, I received a letter stating that I had received a small presidential scholarship to attend. That, coupled with a full-tuition Air Force ROTC nursing scholarship, actually sealed the deal,” Edwards said.

Edwards says because of Tuskegee, she’s had a chance to be successful and excel in any environment.

“The preparation and knowledge within my major of finance was critical, but the self-assuredness and confidence that Tuskegee gave me as a young black female gearing up to enter the world stage was priceless,” she added.

Currently, Edwards serves as a business professional with a wide array of experience across public and private equity, as well as the non-profit sector. Currently, she manages corporate partnerships as a vice president of the Points of Light Foundation, a global non-profit organization founded by former president George H.W. Bush. Edwards also serves as the key fundraiser for the Civic Accelerator Program (National Accel and Investment Fund), which is focused on for-profit and nonprofit early stage ventures with innovative solutions to critical social problems.

“I have a passion for economic empowerment, financial literacy and inclusion — matters I believe play a key role in creating more access and opportunity for minority women and business enterprises, and those traditionally underrepresented,” she explained. “I aim to leverage my business background to create more access for MWBEs, as I am a walking example of how access can dramatically shift the trajectory of a career.”

Edwards credits Tuskegee not only for giving her a place to continue excelling academically, but also a free and open environment to explore and learn with a diverse group of classmates who looked similar to her, but often times were truly unique when considering their cultural, geographical and other differences.

Like many students, Edwards started in one major, but eventually made the switch to another major. In Edwards’ case, her proficiency with numbers and definitive solutions drew her away from nursing to the world of finance.

“Tuskegee emphasized the importance of the pre-graduation experience, so as a sophomore I had the privilege of completing a finance summer internship with Procter & Gamble in Cincinnati — which was then a rare opportunity,” she noted.

“Then the intersection of opportunity and preparation guided me to a highly sought-after internship, where I was among the top 10 percent selected from 2,000 applicants for Sponsors for Educational Opportunity — the chief provider of diverse talent to Wall Street for high-achieving students of color,” Edwards explained.

Later, Edwards headed off to Merrill Lynch for an unforgettable summer in sales/trading in New York City.

“I was in awe of the boisterous vibe of the trading floor — the epicenter for how shares of public companies are traded and currency is exchanged,” she recalled.

Edwards says a job offer leading into her senior year helped seal the deal for her Wall Street career. In 2004, she became the only African-American female stock trader on the New York Stock Exchange. After settling into her role by her third year, the head of the floor for Merrill Lynch thought Edwards had the wherewithal to become a broker.

“It was a whirlwind for me working in the belly of the beast — a dynamic, fast-paced, steep learning curve in a male-dominated environment with high-stakes trading activity, and little to no room for error,” she noted.

Edwards says one of things that she loves about Tuskegee is the camaraderie and support of her alma mater. She added that her treasured homecoming experiences have always been the epitome of good times.

She credits a number of her professors who influenced her career path, including College of Business and Information Science icons like professor of statistics Dr. Leo Upchurch. Most notably, then-Dean Benjamin Newhouse encouraged her to always deliver and reach for skies.

“Dean Newhouse suggested books like ‘Think and Grow Rich’ and had a pulse on everything that students were involved in.,” she recalled. “He personally held my feet to the fire and encouraged my tenacity.”