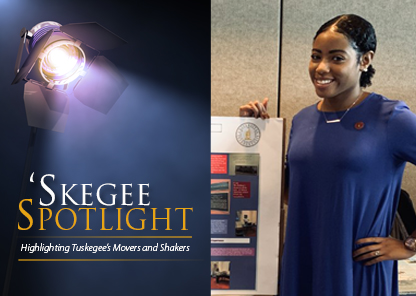 Students like Nakiesha Newton play a role in preserving and sharing African American history. Over the summer, the junior history major had a chance to share the invaluable stories of her ancestors by acting as a historic interpreter for Mary McCleod Bethune, Fredrick Douglass and Carter G. Woodson and playing narrator during her internship with the National Park Service.

Newton, a Utica, New York, native, has always loved history. She says her dad played a major role in centering her life around it.

“My dad was a history major as well. I grew up watching the History Channel,  and in fact, a lot of our family vacations were planned around visiting important places from history,” she recalls. “I knew my love of history would follow me to college, and that’s why I also chose Tuskegee – based on its rich history and also because of the university’s tie as a National Historic Site.”

Newton notes that studying at Tuskegee is like being in a living, breathing history book.

“Tuskegee is a story within itself — every piece of campus is filled with history,” she explains. “From Booker T. Washington’s home, ‘The Oaks,’ and the George Washington Carver Museum, to campus structures made entirely of student-made bricks, our history is forever engrained on this campus.”

Employing a mission to lead and empower

A summer internship with the Greening Youth Foundation in Washington, D.C., allowed her to work as an intern under the National Park Service. She says it allowed her to advance diversity in the conservation field and park services.

During her time in the program, Newton worked in the homes of Mary McCleod Bethune, Fredrick Douglass and Carter G. Woodson, where she gave tours, spoke about each of their legacies, and even inspired her peers to get to know their history better.

“I will always treasure the opportunity to work so closely with my ancestors. I’m proud to have known them, even though it was only through my readings – their legacies played a role in who I can become today,” she notes. “When I think about the time period and area in which they lived, I can’t help but think of them as ‘black powerful people’ who were amazing despite the odds.”

Newton says her favorite home to give tours at was Mary McCleod Bethune’s.

“In her home hangs two chandeliers that were allegedly given to her by President Harry Truman. It is said that President Truman was in the process of remodeling the White House and she asked if she could have them,” she says.

Newton said she also found Bethune’s home to be of interest because it was the former headquarters for the National Council of Negro Women (NCNW), which is still active today. Newton says in the fall she hopes to establish a chapter on Tuskegee’s campus.

“Mary McLeod Bethune was the founder of the NCNW and wanted to encourage Negro women to participate in civic, political, economic and educational activities and institutions. Her commitment to providing education to the members of her African American community is noteworthy, and I want to bring her legacy to Tuskegee,” she explains.

Advancing the study of history

Newton says her experience during the summer has led her to consider a career in conservation, however, she ultimately wants to teach seventh grade history.

“I believe it’s important to pour back into my own community and teach the next generation about our history. I want people to know that history is every day, and we should all know our roots,” she notes.

In addition to her passion to find history in every moment, Newton, says she wants to also work with Tuskegee’s National Park Service to educate not only her peers but those who visit the university’s campus. She wants to be sure Tuskegee’s history and its icons like Booker T. Washington and George Washington Carver are forever treasured and celebrated.