The Office of Communications, Public Relations and Marketing regularly shines its "'Skegee Spotlight" on employees, students and alumni who help make Tuskegee University "the Pride of the swift-growing South." This week's Spotlight was contributed by Brittney Dabney. 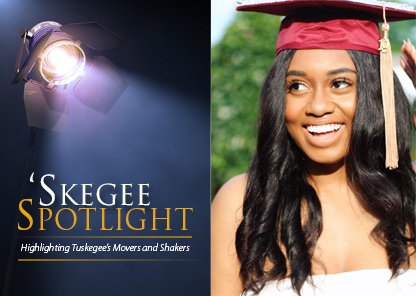 Among this spring’s class of 2019 graduates is Taryn Stewart, who credits Tuskegee University with preparing her for more than just her career, but for life as well. A native of Birmingham, Alabama, she graduated this past spring with a dual degree in accounting and supply chain management.

Stewart recalls that a campus tour quickly moved Tuskegee to the top of the list of where she wanted to go to college.

“I was originally set on attending another school, but I quickly changed my mind after going on a tour at Tuskegee. Once I stepped foot on campus, I was completely in love with the university,” Stewart says.

She said one of her chief requirements for college was that her experience would feel like home — and Tuskegee gave her just that.

“Tuskegee made me feel like I belonged here. I actually had two campus visits: one during the week on an infamous weekly ‘fried chicken Wednesday,’ and the second during open house. Those two visits set the tone for what I would be looking forward to,” she recollects.

Stewart says her decision was also important to her because she was the first in her family to attend an HBCU.

“Attending an HBCU gives off so much energy that cannot be compared. It’s at an HBCU where you truly learn your value and worth,” she notes.

For Stewart, Tuskegee also showed her that her college life is more than just going to class and being involved in extracurricular activities. It’s also about keeping the legacy going for future students and generation. She had an opportunity to do just that as a past member and president of the university’s Ambassador program – the official student representatives and tour guides for Tuskegee, and one of its most recognizable organizations.

“My first encounter with Tuskegee was through a student ambassador. I can remember my ambassador being so excited about not just giving the tour, but welcoming me to Tuskegee,” she recalls. “I felt like I was taking a first-class walking tour, and I was the priority.”

Stewart says because of her personal experience on her first tour, she always wanted other prospective students to have a memorable campus tour experience. As an ambassador, she says it warmed her heart to see her tour participants come back to attend Mother Tuskegee.

“I felt like I was part of their decisions and that it was up to me to make sure that future students had a great first-time experience,” she notes. “I saw at least 10 or more students from my group tours who later enrolled, and some even walked up to me and said it was because of me that they decided to attend Tuskegee.”

Transitioning to the career world

Stewart says she hopes that every student entering the university’s main Lincoln Gates will have a pleasurable experience and be open-minded to all that Tuskegee truly has to offer.

“I would want to encourage all prospective students to get involved in campus activities early on and take advantage of the university’s career fairs and internships. Doing so will help them compete with other students and get a sense of how corporate America works,” she says.

As much as she’ll miss her time as a Tuskegee student, she also says she is excited about her next chapter. Stewart recently accepted a position with Lockheed Martin in Dallas, Texas, where she will work as a project manager.

“I’m looking forward to the opportunity. This is what Tuskegee prepared me for – the real-world – and I know I’ll be successful in every way,” she adds.