The Office of Communications, Public Relations and Marketing regularly shines its "'Skegee Spotlight" on employees, students and alumni who help make Tuskegee University "the Pride of the swift-growing South." This week's edition was contributed by the office's spring intern, Jazz Ross. 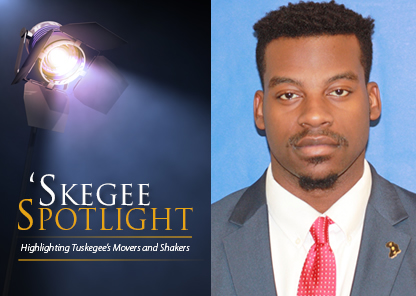 A native of Oakland, California, and 2016 animal science graduate Taurus Thompson originally aspired to be a veterinarian, but is now using his degree in an unexpected way. Since he graduated, he has moved across the country, started his career, and bought a house. Thompson is and continues to make his alma mater proud by achieving and exceeding his goals — and he offers his own experiences as a young alumnus as advice for the members of the class of 2018.

Like many, Thompson quickly had to face the reality of life becoming an adult once he graduated. Often, many people cannot wait to become adults. As a child, it meant you could do whatever you want; however, what went unsaid were the responsibilities that came with being an adult.

“Life comes fast, especially those first six months if you have loans,” Thompson joked. “Being an adult was not what I expected, but it does have its perks.”

One of those perks included buying his first house.

“Buying a house was a huge accomplishment because I did not need the help of my parents. It truly made me feel like an adult,” he said.

The Golden State to the Peach State

In life, you have to make sacrifices to achieve your goals. A native of California, Thompson sacrificed returning to his native “Golden State” for a job in Georgia. Many might have to think long and hard about such a move, but Thompson knew it was the right thing to do — described his transition as “fairly smooth.”

Employing the knowledge he acquired as an animal science graduate, Thompson accepted a position as a team leads supervisor at Perdue Farms in Perry, Georgia. It is his job to ensure everything is done correctly in the frozen-food packaging process — from the ingredients used to the overall packaging procedures followed.

Thompson hasn’t totally abandoned his love for animals and veterinary science. Ultimately, he hopes to open a rehabilitation center for endangered big cats. Although he no longer wants to be a veterinarian, he still would like to work with animals.

“It is okay if you do not have it together [when you graduate]. It is okay because you are young, but you have to believe in yourself,” he stated as encouragement to Tuskegee’s newest graduates.

However, Thompson also mentioned that your goals must have an action plan to support it — meaning, you cannot expect results without putting in the work.

“Networking is the key,” he advised. “It is not always what you know, but who you know — and a great way to grow your network is through your fellow alumni.”