The Office of Communications, Public Relations and Marketing regularly shines its "'Skegee Spotlight" on employees, students and alumni who help make Tuskegee University "the Pride of the swift-growing South." This week's Spotlight was contributed by spring intern Simone Amos. 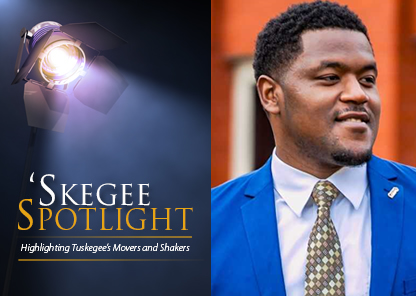 Keeping history at Tuskegee University’s Legacy Museum alive is more than a job for Theo Moore II — it’s the opportunity of a lifetime. The Anniston, Alabama, native began sharing his passion for history with the Tuskegee family in August 2017, when he became the museum’s collections manager and educator.

Theo received a bachelor’s degree in history with a minor in Greek mythology, and a master’s in post-secondary education with a concentration in history, at Troy University. Following graduation, he taught in the public-school system, but quickly felt compelled to do more than just share historical information – he wanted to focus on history beyond the classroom.

“The only thing that gave me answers to the things I wondered about was history — American history,” Theo says. “When realizing that history would give me the answers to my curiosity, I knew right then my profession would always involve history.”

Part of following his passions was finding an opportunity to focus and specialize on African-American history — something he wasn’t able to do during his five years as a high school teacher.

“I wasn’t in favor of keeping a job just because, so I took some time off to find what really piqued my interest. I wanted to find an opportunity that would allow me to teach about African-American history,” he explained.

Theo credits his wife with finding the solution to that void in his life — a Tuskegee University job announcement seeking a collections manager and educator for its Legacy Museum.

“I remember reading the job description, which included taking care of collections, African diaspora, and all-around African-American history,” he recalls. “It was at that moment that I realized the job had all of my passions rolled into one — I knew this was more than a job, it was my future career.”

It wasn’t long before Theo felt the “magic” of the university upon him. For that reason, he wants to make the Legacy Museum a place where students and the community come to learn about their history — and one of the campus’ main tourism attractions.

“It was truly an experience and special moment to be on historical grounds,” he noted. “Tuskegee has such a rich history that you easily fall in love with all that it has to offer.”

Telling visual stories of our past — and future

Stemming from his experience and observations as a teacher, and in further pursuit of his passions, Theo launched his own nonprofit film company in 2017 to capture more than just history. Today, Hiztorical Vision Productions creates short film documentaries for the public that focus on the African-American community. Theo says he and his team strive not only to highlight a city’s history, but to leave an impression on the viewer. Already, Theo’s production company has had the opportunity to show its short film, Crown the County of Lowndes, at the Steele Reel Film Festival in Birmingham.

He and his team have a few upcoming projects that are in the works. One of those is a documentary to spotlight Hobson City — the first city in of Alabama to be entirely governed by African-Americans in 1899 — that Theo hopes to premiere in February 2020.

“We are helping to preserve Hobson City’s history by documenting the city’s past and present. Recently, we applied for a small grant that would help tell the story of this community,” Theo explained.

Guiding student interest toward preserving the past

Through their work, Theo and his team have engaged a few student volunteers at Tuskegee. Simone White, a junior majoring in communications and minoring in African-American studies, assisted the team with research on Hobson City. Other students have included Kyra Jenkins, a senior dual major in history and political science; Nathan Tolbert, a sophomore mechanical engineering major; and Asia Reece, who attends Spelman College in Atlanta.

“My ultimate goal for all of our student volunteers is for them to know the importance of documenting history — African-American history, specifically. I believe visiting historical places and interacting with the people of the community will help them, and all of us, obtain a certain understanding of why we do what we do,” Theo explained.