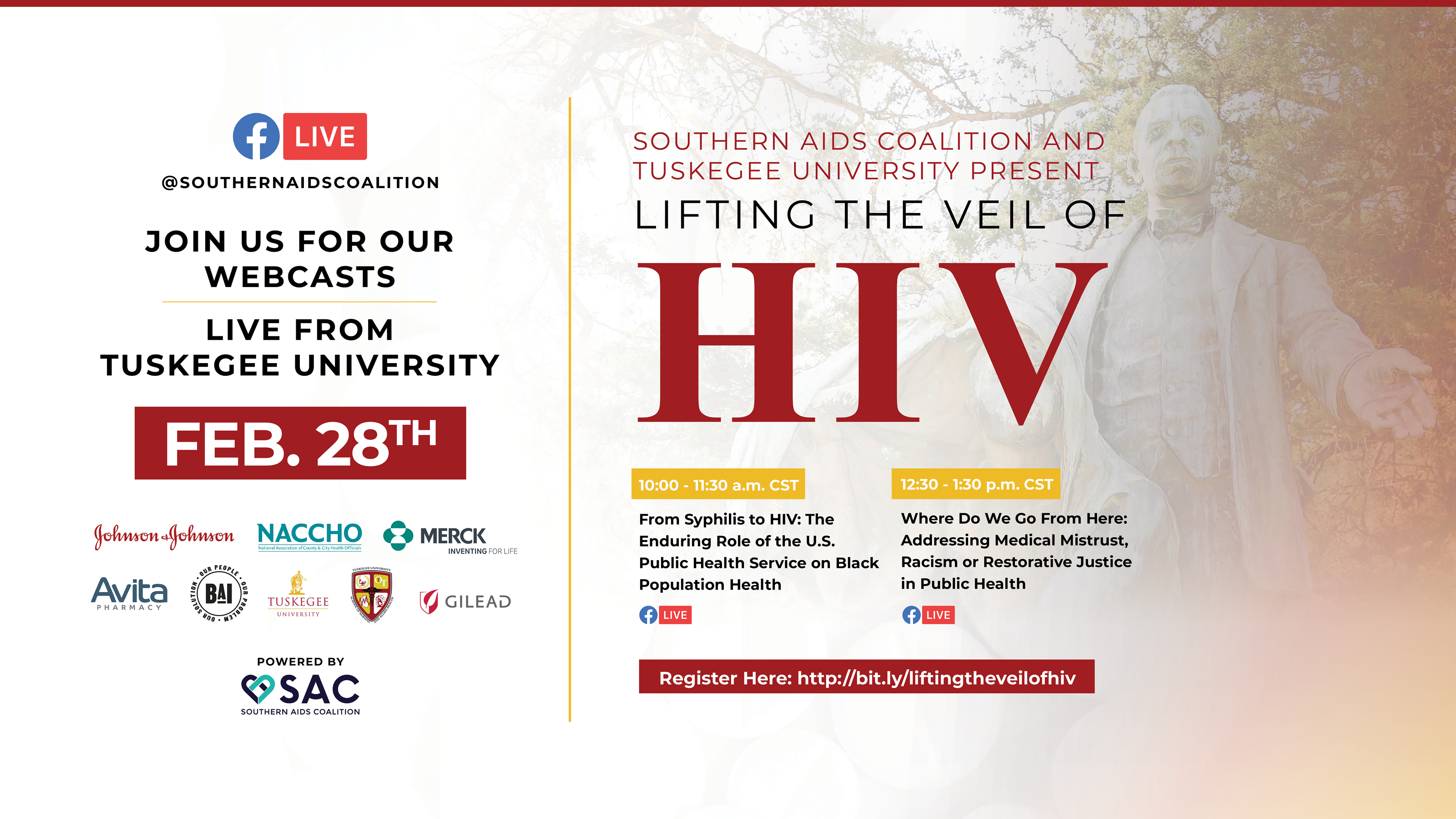 On Friday, Feb. 28, the Southern AIDS Coalition (SAC) will partner with Tuskegee University to present “Lifting the Veil on HIV.” This summit, held at sites near and on the university’s campus, will address the implications racism and medical mistrust have on communities impacted by HIV.

The South — and Alabama in particular — has a deep relationship with medical mistrust. In 1932, Macon County, Alabama, became home to the “U.S. Public Health Service Syphilis Study at Tuskegee.” It remains the longest and most immoral health and medical treatment study ever conducted in U.S. history. This non-therapeutic study of the progress of untreated syphilis in human beings recruited poor African-American men living in rural Tuskegee and throughout Macon County. The men were uninformed of their syphilis status and untreated for the disease without their informed consent.

The physical mistreatment and non-treatment for syphilis has contributed to generational health problems, as well as ill feelings and mistrust by the families in these communities. The experiment ended in 1972.

Today, the South is at the epicenter of an HIV epidemic. According to the Centers for Disease Control, more than 52% of all new HIV diagnoses in the nation are in the South. This is 36% higher than the national average.

“HIV is a racial justice issue that impacts the black community at disproportionate rates,” said Aquarius Gilmer, SAC’s director of government affairs and advocacy. “Compounding these disparities is the reality of persistent racism within and among public and private health systems and stakeholders that fuels medical mistrust. The legacy and burden of medical mistrust was exacerbated by the U.S. Public Health Service’s government-sanctioned ‘Study of Untreated Syphilis in the Negro Male.’ Blacks continue to experience poorer health outcomes and decreased qualities of life as a result of this mistrust and racism in public and private health systems.

Despite advances that can improve one’s medical well-being and quality of life, Gilmer said that mistrust among those who require care the most remains rampant.

“Biomedical advances in HIV prevention and care, such as PrEP, PEP and Treatment as Prevention, will not be fully realized if the community questions the motives of public health programs and providers,” he explained. “This convening comes at a critical time as we must work together, those in both private and public health, to identify various strategies — including investments — that build trust. No one entity can rebuild that trust alone.”

“Lifting the Veil on HIV” will convene a think tank to develop solutions for addressing the medical mistrust that resulted from the U.S. Public Health Service Syphilis Study at Tuskegee, and address the impact that mistrust is having on the fight against the Southern HIV epidemic.

“The pairing of historically black colleges and universities with community organizations such as the Southern AIDS Coalition is a major step toward bringing to the table those populations most dramatically impacted by HIV with government entities responsible for healthcare administration,” said Dr. Vivian Carter, chair of Tuskegee’s Department of Psychology and Sociology. “It is crucial that we bring together a diverse coalition of partners headed by minority groups to address the barriers to healthcare across the rural South and to advance solutions that will make a difference in the fight against the nation’s HIV epidemic.”

For more information about the summit — and to register online — visit bit.ly/liftingtheveilofhiv. A full program of the Feb. 28 “Lifting the Veil on HIV” summit, including session moderators and panelists, is available for download. The day’s schedule includes:

The 10 a.m. and 12:30 p.m. sessions will be streamed live on the Southern AIDS Coalition’s Facebook page at www.facebook.com/SouthernAIDSCo.

In addition to the Southern AIDS Coalition and Tuskegee University, the summit is presented in partnership with Avita Pharmacy, Black AIDS Institute (BAI), GLADD, Gilead, Johnson & Johnson, Merck, and the National Association of County and City Health Officials.

About the Southern AIDS Coalition: The Southern AIDS Coalition (SAC) is a non-partisan coalition of government, community and business leaders working alongside thousands of people living with HIV and our allies to end the HIV epidemic in the South. We do this through public health advocacy; capacity-building assistance; PLHIV leadership development; research and evaluation; and strategic grant making. To learn more, visit www.southernaidscoalition.org.