Tuskegee holds ribbon-cutting thanks to grant from The Home Depot

TUSKEGEE, Ala. (January 25, 2017) — Tuskegee University held a campus celebration and ribbon-cutting ceremony yesterday to announce the completion of the newly invigorated Tennis Courts that were in disrepair. This project was made possible through a grant from The Home Depot.

Tuskegee University was one of the top winners of the 2016 Home Depot “Retool Your School” Campus Improvement Grant Program, developed to benefit Historically Black Colleges and Universities (HBCUs). Tuskegee received a $30,000 award.

Through the Home Depot program, 9 schools received the 2016 grants totaling $300,000 for on-campus improvements. The winners were chosen by a combination of public online voting and careful review by a panel of judges selected by the sponsor based on certain criteria.

Yesterday’s on-campus celebration included performances by the Marching Crimson Pipers Band and the Cheerleaders. Serving as the MC for the program was Burt Rowe, President of the Tuskegee University National Alumni Association (TNAA), who spear-headed the contest effort along with Roy Nunn from our University Advancement and Development Office.

Tuskegee University President, Dr. Brian Johnson brought greetings and thanked all who voted and were involved in this effort. He added that all we do is win.

The check to the school was presented by managers and staff of The Home Depot store on Chantilly Parkway in Montgomery, who said they were happy to partner with Tuskegee University in this effort.

Remarks were also brought by Curtis Campbell, the Athletic Director, Earnest Grant, Head Coach of the award-winning Tennis Team, and by the Captain of the Tennis Team. 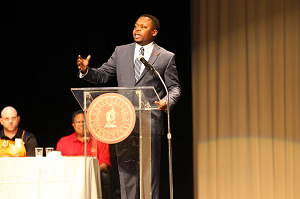 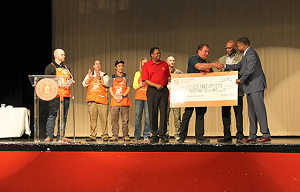 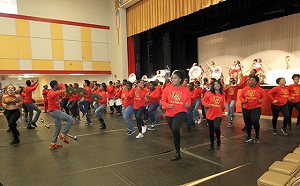 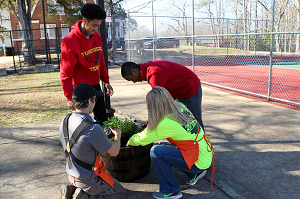 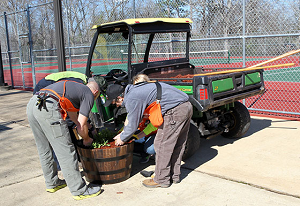 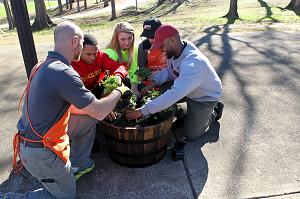