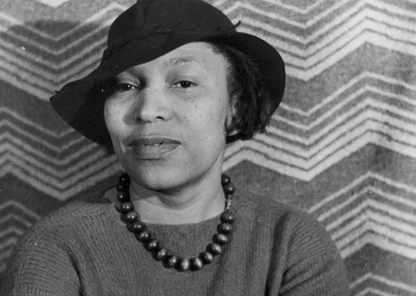 A public reception at 4:30 p.m. in the university’s Legacy Museum will include the formal unveiling of “The Soul of Zora: A Literary Legacy through Quilts Exhibition.” The exhibit features nine quilts inspired by Hurston, an inaugural Alabama Writers Hall of Fame member.

The quilts are on loan from Marla A. Jackson, executive director of the African American Quilt Museum and Textile Academy Museum in Lawrence, Kansas. Each reflects the imagination and talent of nine contemporary American quilters who are committed to preserving this important art form. Inspired by Hurston’s use of southern vernacular, her ideas about love, and Janie’s quest for autonomy and freedom in her book “Their Eyes Were Watching God” (1937), these quilters pay homage to the writer who yet reminds us to “jump at de sun.”

Hurston, born in Notasulga to John Hurston, a formerly enslaved minister, and Lucy Potts Hurston, a school teacher, was a graduate of Barnard College. She completed her most well-known novel, “Their Eyes Were Watching God,” in seven weeks while in Haiti. Her travels took her far from the rural Alabama town of her birth, yet her semi-autobiographical work “Jonah’s Gourd Vine” (1934) recalls historical landmarks of Macon County, such as Tuskegee Institute and the creek, a natural border and life-source. Most recently, “Barracoon,” published posthumously in 2018, has attracted widespread acclaim. This compelling text provides an account based on Hurston’s interviews of Cudjo Lewis, who was taken to Alabama on the last slave ship to reach American waters.

In addition to her literary contributions as a Harlem Renaissance writer, she was also a folklorist and anthropologist. She was a member of Zeta Phi Beta Sorority Inc. and famously remarked in her 1928 essay, “How It Feels to Be Colored Me,” that “…I am not tragically colored. There is no great sorrow dammed up in my soul, nor lurking behind my eyes.... Even in the helter-skelter skirmish that is my life, I have seen that the world is to the strong regardless of a little pigmentation…. No, I do not weep at the world — I am too busy sharpening my oyster knife.”

“The Soul of Zora: A Literary Legacy through Quilts Exhibition” is co-sponsored by the National Endowment for the Humanities and a grant from the Alabama Bicentennial Committee. Additional funding comes from the Andrew W. Mellon Foundation and Tuskegee University’s College of Arts and Sciences. The “Literary Legacies” grant is being administered by Dr. Adaku T. Ankumah, principal investigator, and Dr. Rhonda Collier and Dr. Zanice Bond, co-directors — all faculty members in the Department of Modern Languages, Communication, and Philosophy.

The exhibition will remain open to the public in the Legacy Museum until July 14. Upcoming events and other community outreach programs will be announced on the Literary Legacies website, which is currently under construction.