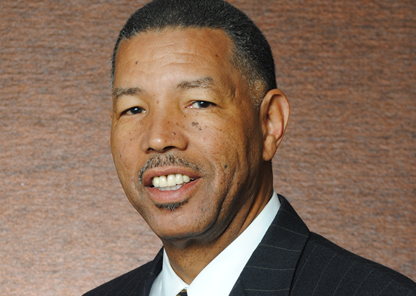 The Hon. Lawrence “Tony” Haygood Jr., mayor of the City of Tuskegee, will be the speaker for the university’s summer commencement on Friday, July 27.

Elected as Tuskegee’s mayor in August 2016, Haygood’s civic service extends beyond the city to include appointments as chair of the Alabama League of Municipalities’ Committee on Energy, Environment, and Natural Resources, a member of the Committee for Federal and State Legislation, and as a gubernatorial appointee to the state’s Workforce Development Board. Prior to his election as mayor, Haygood served four years on the Tuskegee City Council as councilman-at-large and mayor pro tem.

“Tuskegee University is fortunate to have such a wonderful civic partner like Mayor Haygood,” said Tuskegee President Lily D. McNair. “His advocacy for the university and his role as one of our ambassadors throughout the county, state and nation are much appreciated.”

In his professional capacity, Haygood has for the past nine years served as an economic/business development specialist with the Tuskegee-Macon County Community Development Corporation (TMCDC). In this role, he promotes business and industrial development, coordinates housing rehabilitation projects, conducts entrepreneurial training, manages a business incubator with a community revolving loan fund, and has launched improvement efforts for community corridors. He collaborates closely with the Tuskegee University Cooperative Extension Program and as a member of the Booker T. Washington Economic Summit Planning Committee. His intimate familiarity with the community and surrounding county also makes him a valued advocate, tour guide and planner for area tourism.

His work as a grant writer on behalf of TMCDC and the university’s Cooperative Extension Program has led to substantial grant funding for community programs. Due in part to his success in these areas, Haygood has served as vice-chairman of the Historically Black Colleges and Universities Community Development Action Coalition national board, chair of the Tuskegee Area Health Education Center, and state vice-president for the Alabama New South Coalition — among other leadership roles.

A member and past president of the Alpha Nu Lambda Chapter of Alpha Phi Alpha Fraternity Inc., Haygood received a bachelor’s in political science with a minor in economics from Rhodes College, and an MBA from Auburn University Montgomery. His post-MBA studies have included work in management science at the Krannert School of Management at Purdue University and the Georgia Institute of Technology. Most recently, he completed the Intensive Economic Development Training Course at Auburn University.

Haygood’s address will be part of Tuskegee’s Summer Commencement Exercises, scheduled to begin at 10 a.m. on Friday, July 27. The ceremony — at which the university anticipates awarding 56 undergraduate degrees, 47 master’s degrees and three doctoral degrees — will be held in the University Chapel. Tuskegee hosts commencement ceremonies at the conclusion of each spring and summer semester. Other events include: