Contact: Tameka Harper, Office of the Dean of Students

Thanks to a student-led partnership in its Division of Student Affairs, Tuskegee University has reimagined its Tiger’s Den Food Pantry as a resource for students struggling with the reality of food insecurity.

The university will hold a grand reopening ceremony on Thursday, Feb. 14 at 11 a.m. at the food pantry, which is located on the third-floor ballroom level of Tompkins Hall.

The reimagined food pantry is the result of a collaboration between junior political science major Kiyana Porter, Vice President for Student Affairs Regina Burden, Dean of Students Tameka Harper, and representatives of the university’s Department of Social Work to bring the resource back online for the benefit of the campus community.

“As a first-generation student and a part of a large family, resources like ‘extra money’ have not always been available to me,” Porter noted. “During my freshman year, I got the idea of a campus food pantry for students after my two roommates and I were struggling to find something to eat after on-campus dining options closed for the evening.”

Porter sought support from Burden to identify other potential campus resources. Together, they partnered with the Department of Social Work through the leadership of department head Dr. April Jones. The team grew in late January to include Harper, who with her appointment as dean of students, will serve to coordinate the food pantry’s daily operations.

“As I conducted surveys to assess the need, students began asking how they might help,” Porter recalled. “Students understood the need and desired to help with respect to giving back to their university because Tuskegee is like a family.”

Located in Tompkins Hall, the food pantry will be open from 2 p.m. to 6 p.m. each Tuesday and Thursday, as well as by appointment. Organizers plan to provide those relying on the food pantry’s services with highly nutritious, single-serving foods that can be conveniently prepared by on-campus residents.

Following a three-month pilot stage the remainder of the spring semester, the group will evaluate the food pantry’s effectiveness and adjust its operations as needed.

“Our initial aim was to collect information that illustrated the need for the food pantry,” Harper explained. “Now, we are interested in seeing how we can rightsize the effort to meet campus need. We’re going to see how many students are utilizing it, as well as what foods and what operating days and times are most popular. Based on that data, we plan to expand the services beginning with the fall semester, if the need is there.”

The grand reopening on Feb. 14 will include giveways, raffles and registration for services. The event will be co-sponsored by the Distinguished Men of Omega Psi Phi Fraternity, Lambda Epsilon Chapter. Bibs and Blankets International has provided additional support for the food pantry as a community sponsor.

Nationally, the issue of food insecurity on four-year college campuses is growing — with estimates ranging from 20 percent to 33 percent. This is more than twice the prevalence of American households experiencing food insecurity, according to data available from the U.S. Department of Agriculture.

Anyone wishing to support to the food pantry may donate non-perishable food items, toiletries and feminine hygiene products by bringing them directly to Office of the Dean of Students in 203 Tompkins Hall. All monetary donations can be made through the university’s Office of Development in Kresge Center or at www.tuskegee.edu/give by specifying support for the Tiger’s Den Food Pantry. 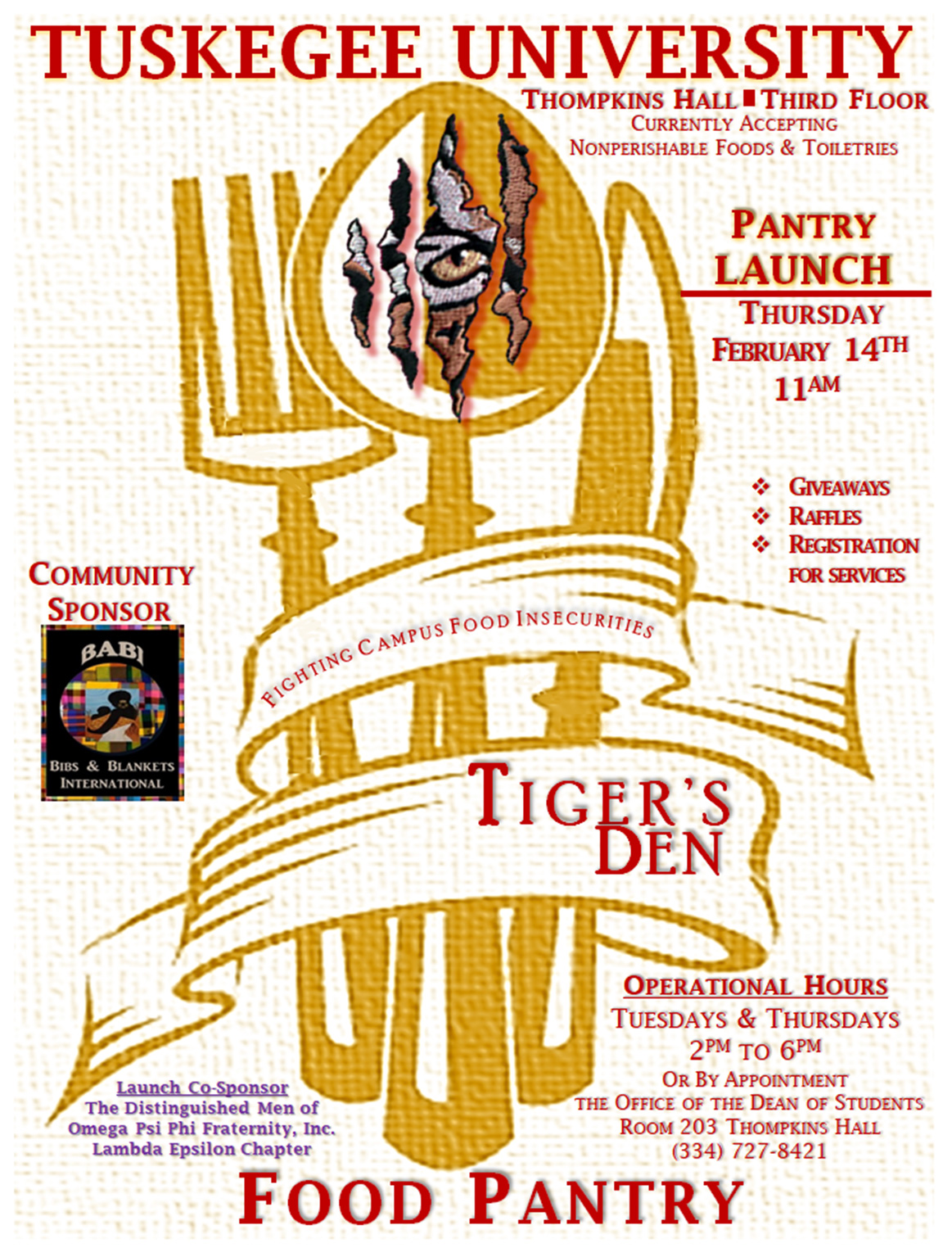