Throughout the month of February, Tuskegee University will host a visual art exhibit entitled “Lynchings and Liberators: An Odyssey to Justice.” The exhibition by artist Vivian Green Harris includes artwork she has compiled and portraits depicting individuals directly related to the Civil Rights Movement.

The month-long exhibit is free and open to the public in the university’s Ford Motor Company Library (838 W. Montgomery Rd.) during its regular operating hours. It coincides with the university’s celebration of Black History Month, which will include a variety of lectures, panel discussions and academic events.

Inspired by a painful past

Lynchings in the United States trace their origins to the post-Civil War South. While frequently associated with African Americans and racism, lynchings affected thousands of victims — mainly men, but also included some women and sympathetic whites. Lynching was a punishment most often meted out for murder, attempted murder, rape or attempted rape — or the accusation of these, which was often the pretext for lynching blacks who violated Jim Crow laws.

Harris drew inspiration for her exhibit from wanting to know more about the fate of those lynched — especially her own paternal great-grandfather, Willis Felix Faust, who had been lynched in Mississippi in 1908. Because of Tuskegee’s international acclaim for having compiled the most extensive lynching database in the U.S., Harris turned to the University Archives for help.

While Tuskegee’s database lacked specific information on Faust, Harris ultimately compiled a biography of her grandfather that she entitled Gloster — named in honor of the small Mississippi town where Harris’ grandmother and her siblings were born. As she shared about the motivation for her research with others, they in turn shared with her their own painful and personal stories about the lynching of family members, friends and neighbors. Armed with those unpublished stories, Harris decided to express her research through the visual arts.

“I use my art to stay connected to my family’s heritage and to remind people about the past,” Harris said of her ongoing work to preserve these accounts of her own family along with others with whom she’s had contact.

Preserving a dark chapter in history 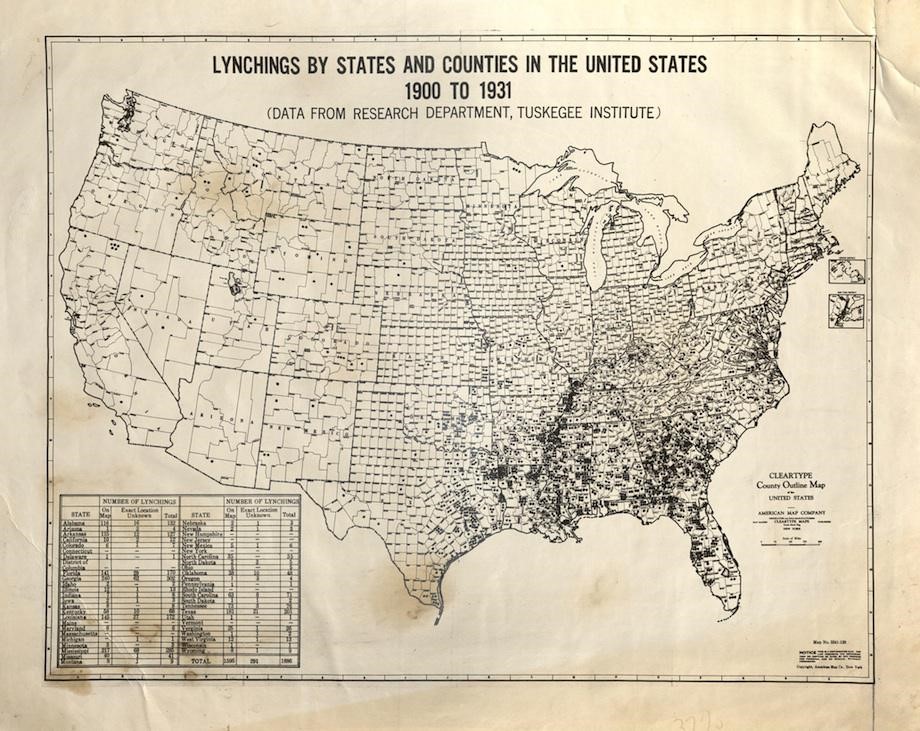 Tuskegee University now houses the nation’s most complete record of lynchings occurring in the U.S. during an 86-year period spanning 1882 to 1968. During this time, 4,743 people were lynched — including 3,446 African Americans and 1,297 whites. More than 73 percent of lynchings in the post-Civil War period occurred in the Southern states. Although reference to the term conjures images of hangings, victims were also killed in a variety of other ways that included being shot repeatedly, burned alive, forced to jump off a bridge, dragged behind cars, and the like.

Efforts to catalog this information began in 1908 when Booker T. Washington hired sociologist Monroe Work to found Tuskegee’s Department of Records and Research (the precursor to today’s University Archives). Work’s diligence led to the initial publication in 1912 of the Negro Year Book: An Annual Encyclopedia of the Negro, which incorporated his periodic summation of lynching reports and has established the university as one of the most quoted and undisputed sources on this form of racial violence.

Today, the university’s lynching database remains an invaluable research and reference source for academic and historic scholars; organizations like the Equal Justice Initiative’s new National Memorial for Peace and Justice in Montgomery; and as inspiration for artists and storytellers like Harris.

“Although we still have a long way to go, exhibits like ‘Lynching and Liberators’ that show how far we have come in race relations,” said University Archivist Dana Chandler, who collaborated with Harris to bring the exhibit to campus.

Harris, a Midwestern native, took art classes as electives and continued to paint as a hobby while attending college in the South. She eventually settled in Nashville with her three children — including one foster child — and made a career for herself at Tennessee State University. Now retired, she resides in Alabama, where she continues to collect lynching stories.

Her daughter Tya Brijhea Harris earned a doctor of veterinary medicine degree from Tuskegee in 2007, and her son Rashon is a graduate of both Howard University and Tennessee State. Her foster daughter, Melinda Stevenson, died in 2018.