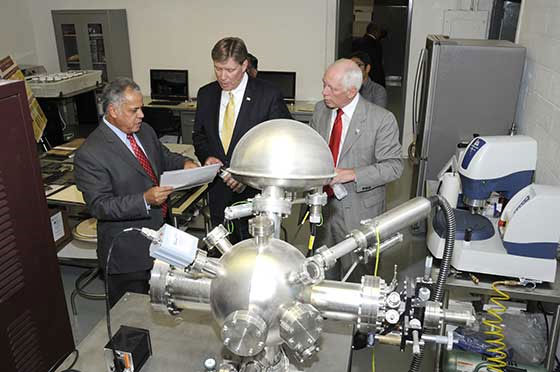 According to Dr. Aglan, "The Nanostructured Polyimide Thin Film (NPTF) invented at Tuskegee University has unique properties being extremely lightweight, durable material suitable for high temperature and harsh environments. For example, it has the potential to replace thick glass substrates currently used in solar concentrators. This results in considerably reducing the area to weight ratio; a welcome contribution to the economical viability of solar energy production. Due to its superior cohesive and interfacial adhesive strengths, it can also be used as a coating, for example in additives manufacturing (3D-­-printing) to coat net shape articles for protection against erosive/corrosive environments."

In addition he stated, “We have been trying to tailor its use as a conductive membrane for batteries and fuel cell applications, and have tested it for use as a coating on composite materials used for helicopter blades to prevent erosion."

The Nanostructured Polyimide Thin Film (NPTF), is a type of polymer combined with nanosized carbon tubes and/or nanosilicate particles as well as other additives. “There are many coatings available, however the NPTF has combined desirable attributes such as cohesive and interfacial strength and durability, particularly in harsh environments,” Aglan said.

To learn more about the College of Engineering, go to: http://www.tuskegee.edu/academics/colleges/ceps.