Tuskegee University workshops seek to increase awareness, hope among those at highest risk for cervical cancer

On Monday, Aug. 26, faculty from Tuskegee University traveled to Union Springs, Alabama, with a message of hope for women ranging from middle-school age to adulthood — hope, and real preventative measures for falling victim to cervical cancer.

The workshop, entitled “Hope: Cervical Cancer Awareness,” was designed to educate residents of Bullock County about cervical cancer risk factors and what they can do to avoid becoming a medical statistic. Currently, Alabama is ranked first in the nation for cervical cancer mortality rates. The most recent data from the Centers for Disease Control and Prevention indicate that nationwide 12,984 new cases of cervical cancer were reported in 2016, with 4,188 women dying of the disease. 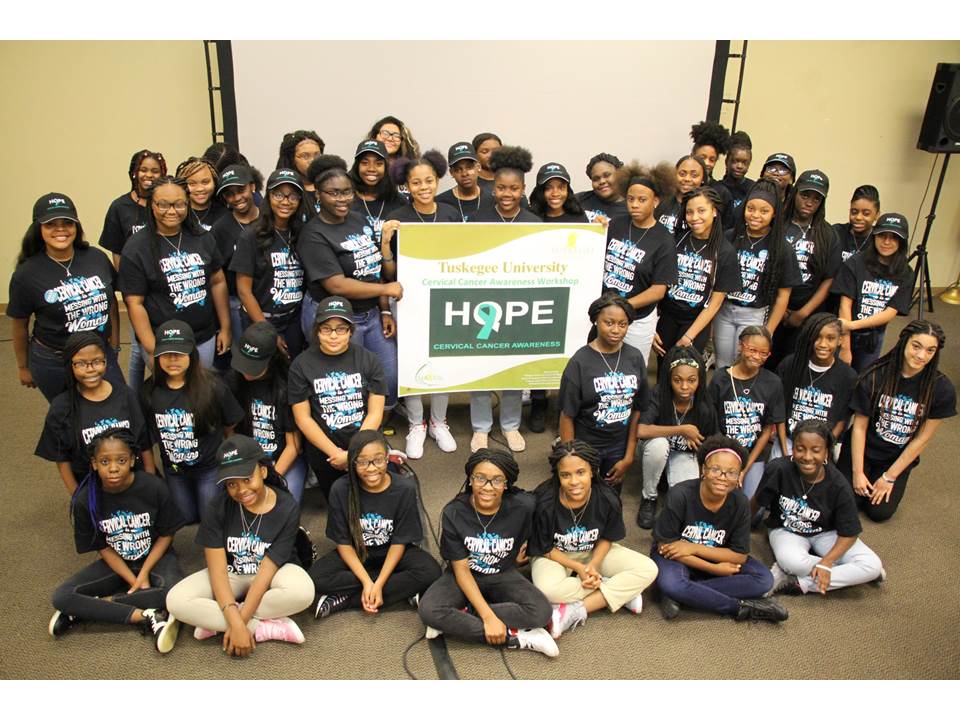 The workshop — the second event of its kind hosted by the Tuskegee University Center for Biomedical Research — attracted more than 100 participants. Noteworthy among those were 40 eighth graders from South Highlands Middle School (pictured to the right). Middle-schoolers are a prime audience for public education efforts like this, since the majority of cervical cancer is caused by strains of the Human Papilloma Virus (HPV) acquired at an early age through sexual activities — but taking years or decades before the infection converts to cancer.

“Our primary message for parents of school-aged girls is vaccinate, vaccinate, vaccinate,” said Dr. Roberta Troy, a professor of biology who also serves as Tuskegee’s interim provost. “Cervical cancer caused by HPV is preventable by a vaccine directed against HPV, and children should be vaccinated as early as possible, which right now is age 11.”

Currently, Alabama is ranked 44th in the nation for the number of people receiving the HPV vaccination — making it among the states with the lowest HPV vaccination rates.

The August workshop was the second in a series of workshops that began in September 2018 — that one in the Black Belt’s Macon County. The group will continue its workshop series with its next event to be hosted on Sept. 24 in Lowndes County, which is also located in the Black Belt.

Dr. Ehsan Abdalla, a research assistant professor in Tuskegee’s Department of Graduate Public Health, noted that these workshops are intentionally conducted in Alabama’s Black Belt. More than 200 new cervical cancer cases are diagnosed in Alabama annually — with both the rates of diagnosis and mortality higher than national averages. Within Alabama, the diagnosis of cervical cancer and morality rate among black females is higher than that of white females. Remarkably, available data indicate that cervical cancer mortality rates among black female Alabamians is consistently high, despite that the frequency of screenings among their white females is higher. Contributing to this epidemic is less-than-adequate availability of gynecologists and medical facilities in Alabama’s Black Belt region, as well as diagnostic and treatment limitations for Black Belt residents relying on services funded by Medicaid.

“Educating the community should empower residents in the Black Belt and throughout Alabama to demand policies that prioritize what is important to them, which in the case of cervical cancer prevalence and mortality means greater access to and availability of adequate health care networks,” Abdalla said.

“Poverty, lack of insurance, and lacking access to health care all affect the health outcomes of local communities throughout the Black Belt,” added Crystal James, head of Tuskegee’s Department of Graduate Public Health in its College of Veterinary Medicine. “What further impedes our efforts, from a public health perspective, is a lack of reporting — and even the suppression of reporting — of health outcomes in Black Belt counties and throughout Alabama. This in turn prevents health professionals and policymakers from responding and allocating resources to this crisis in an appropriate way.”

Troy, who shared historical perspectives of cervical cancer — especially the legacy of Henrietta Lacks, an African American woman who developed and died of cervical cancer in 1951 at age 31. While Lacks’ “HeLa” cervical cancer cells have helped the medical community since that time advance its understanding of a number of cancers and other diseases, the collection and culture of her cells without her knowledge or consent laid the foundation for most of our contemporary “informed consent” patients’ rights.

James, who presented current outlooks of prevalence, death, socioeconomic factors and other etiological factors for cervical cancer and reproductive health outcomes in the Black Belt and throughout the state.

Philips, who spoke about cervical cancer from a physician’s perspective, including the importance of clear communication with physicians about someone’s reproductive health concerns, and the need for screening tests and patients clearly understanding the results of those tests.

Dr. Vivian Carter, head of Tuskegee’s Department of Psychology and Sociology, who touched on family perspectives and the need for early detection. Utilizing storytelling, she illustrated the need for young girls to know their bodies and be firm advocates for their personal health.

Dr. Pamela Payne Foster of the University of Alabama’s Department of Community Medicine and Population Health, who spoke about the 2018 Human Rights Watch report “It Should Not Happen,” which points out the health care system’s failure to prevent cervical cancer deaths in the state’s Black Belt region.

The workshop was offered through Tuskegee University’s Center for Biomedical Research — a initiative funded by the National Institutes of Health (NIH) through its National Institute on Minority Health and Health Disparities (NIMHD) division. Faculty affiliated with the center seek to take a multidisciplinary approach to biomedical research by combining cutting-edge laboratory inquiry with engaging community outreach and education.

For more information about the workshop programs, contact event organizers Dr. Ehsan Abdalla of the Department of Graduate Public Health at eabdalla@tuskegee.edu; Mary Elizabeth Brooks of the School of Education at mbrooks@tuskegee.edu; or LaTanya Hunt-Haralson, Cooperative Extension agent in Tuskegee’s Department of Agriculture and Environment Sciences, at lhuntharalson@tuskegee.edu.