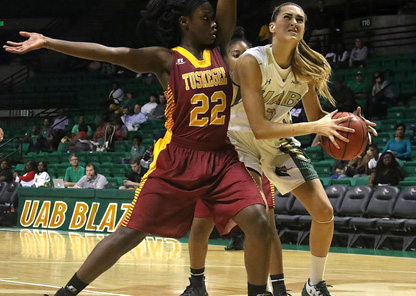 The Tigerettes open the season on the road in an invitational at hosted by Montevallo Nov. 11-12. TU will face both the Falcons and Auburn University-Montgomery.

Quacy-Barnes Timmons will introduce her team to the home crowd for the first time Nov. 17 when the Tigerettes play host to the University of West Georgia.

The team will play twice over the Thanksgiving break with both games within the state.  Nov. 21. they will make the short trip to Montgomery for a rematch with AUM. That ensuing Saturday, Young Harris College visits Chappie James Arena Nov. 25.

Arguably the biggest challenge of the season comes Nov. 30 when the Golden Tigers travel to Pensacola to face the University of West Florida, a team that made it to the Elite Eight of last season's NCAA Tournament.

TU will host a pair of games in early December with Spring Hill College Dec. 2 while West Florida returns a home game on Dec. 5.  The team will close out the month facing Conference USA foe UAB Dec. 30.

The Southern Intercollegiate Athletic Conference schedule is highlighted with trips to Benedict, the 2016 defending SIAC Tournament Champions on Jan 4 and a pair of matchups with Central State Jan. 16 and Feb. 17 respectively.  The Marauders won the Western Division last season.