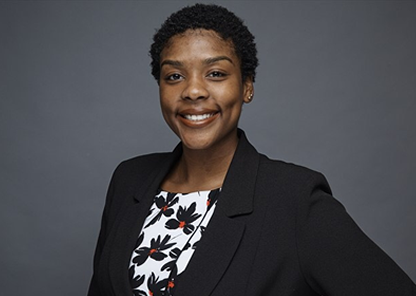 Caleb Washington, a senior from Demopolis, Alabama, majoring in sociology, is among the eight recipients of the Beyoncé Knowles-Carter and BeyGOOD’s Homecoming Scholars Award for the 2018-19 academic year.

Beyoncé’s BeyGOOD initiative announced the $25,000 merit-based scholarship program in April 2018 following her Coachella performance — an homage to excellence in education and a celebration of the homecoming weekend experience. Tuskegee University was among the four universities Beyoncé originally named as beneficiaries of this year’s scholarship program.

Washington transferred to Tuskegee from the University of West Alabama in the fall of 2017. This fall, she will begin her senior year, and continues to pursue a bachelor’s degree in sociology with a minor in public policy.

Her concern for the rights and welfare of others led her to take special interest and pursue studies in law and public policy. She has integrated these areas to gain a more thorough understanding of the legal system so she can better represent clients in both the public and private sectors. She believes that policies created to help the public should be focused on providing aid to all citizens, regardless of race, religion, gender, sexual orientation, or other pseudo-socially divisive entities. She ultimately hopes to utilize her cross-sectional private and public interests to reform urban and underdeveloped communities throughout the world.

In an essay that was part of her scholarship application, Washington noted her desire to emulate Rosa Parks’ example of political and social activism.

“When considering Mrs. Parks’ humble beginnings…and her journey to becoming a highly respected and noted civil rights activist, I am inspired and determined to make an impact on society much like the one she made,” Washington wrote. “[She] created a path filled with resilience and tenacity for positive and effective change that I am honored and determined to follow.”

In the meantime, Washington has accepted a position with Goldman Sachs, where she is concluding a summer internship as an analyst in its Salt Lake City Investment Banking Global Compliance Division. While maintaining a 4.0 GPA, she is president of the university’s Bioethics Honors Program, chapter liaison for its Pre-Law Society, and secretary of the Sociology Club. She also is a member of the Pi Sigma Alpha Political Science Honor Society, Tuskegee University’s NAACP Chapter, and Alpha Phi Omega (a community service-based organization). She recently was honored nationally as a 2018-19 Sidley Austin LLP Prelaw Scholar.

All qualifying applicants submitted a 1,000-word essay about one African or African-American thought leader in their field who has inspired them to achieve their goals (educational, professional, and/or community-driven). The essay included how applicants planned to contribute to history through their own life’s work. Also, a 3.5 GPA or above was required at the time of application, and recipients must maintain that GPA throughout the scholarship funding period.