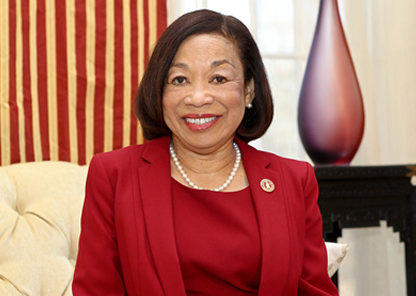 A new era of leadership and excellence will serve as the overarching theme for Tuskegee University’s upcoming inauguration of President Lily D. McNair. McNair will be formally installed as the institution’s eighth president — and its first female president — in a ceremony on Friday, March 15. Events throughout the week of March 10, which in addition to the installation ceremony include a symposia and fundraising gala on March 16, will celebrate this historic milestone in the life of the 137-year-old historically black university.

The March 15 Inaugural Convocation and Investiture Ceremony will begin at 3 p.m. central time in the university’s Gen. Daniel “Chappie” James Arena. The program will include salutations from various dignitaries, musical performances celebrating the occasion, and a presidential address during which McNair will outline her vision for a new era of leadership and excellence. During the ceremony, McNair will receive the university’s presidential medallion and other symbols relating to her role as its chief executive officer.

A community-wide reception will immediately follow in the campus’ Kellogg Hotel and Conference Center.

While her inauguration marks a new era for the university, McNair — who has served as Tuskegee’s president since July 1 — is mindful of the tradition of leadership she continues and that dates back to the appointment in 1881 of Booker T. Washington as its founding president. She noted her daily passing of The Oaks — Washington’s campus home now maintained by the National Park Service —allows her to reflect on her place in that history.

“I think about Booker T. Washington a great deal. The more I learn about him, the more I appreciate his vision — not just for the university and its future, but for societal matters like education and health of all people,” she said. “Dr. Washington set a bar that I strive each day to uphold, as I challenge myself to make this historic and revered university even greater and grander than he ever conceived.”

On Saturday, March 16, McNair will preside over an Inaugural Symposia, also to be held in the Kellogg Hotel and Conference Center. The event, beginning at 9 a.m. central time, will further explore her theme of leadership and excellence by highlighting the contributions of women through three separate panels focusing on higher education, business and faith. Panels featuring African-American female leaders — several of whom have been McNair’s mentors and colleagues throughout her career — will discuss factors associated with their professional success, as well as insights into how to better strengthen and foster future opportunities for women.

McNair’s inauguration occurs just one week after International Women’s Day on March 8. As with that day, Tuskegee’s Inaugural Symposia and related events seek to underscore the impact female leaders have in higher education and other sectors. According to the American Council of Education’s 2017 American College President Survey, only 30 percent of the nation’s college presidencies at the time were held by women, and women of color represented only 5 percent of sitting presidents.

Inaugural week events will conclude Saturday evening with a ticketed, black-tie fundraising gala at the Renaissance Montgomery Hotel and Spa in Montgomery, Alabama. The gala will begin at 7:15 p.m. central time, and be preceded by a VIP-ticketholder reception beginning at 6 p.m. The event will be emceed by WSFA-TV news anchor Tonya Terry, and will feature a musical performance by R&B singer/songwriter Will Downing.

Prior to formal events on March 15 and 16, a pair of student-led events will kick off the university’s inaugural activities. During the afternoon of Sunday, March 10, through the leadership of its Student Government Association, the university will partner with locally based nonprofit Let’s Rebuild Tuskegee. The organization seeks to revitalize the community by eliminating blight and rehabilitating old and dilapidated homes throughout the city.

This day of service will focus on helping renovate at least two area homes — with the goal of engaging the broader campus and local communities the effort. Teams of students and other university and community volunteers will assist with home-improvement needs that vary from basic projects like painting and sanding to intermediate projects like demolition and drywall placement.

From 5 p.m. to 8 p.m. central time on Wednesday, March 13, students will celebrate “A Night with the Star” during a semi-formal student gala in the university’s Logan Hall. The free event will feature a speed-dating-style opportunity for students to visit with McNair in small-group settings in addition to celebrating her upcoming inauguration with her.

To advance McNair’s vision, the university has launched a $1 million “Campaign for Leadership and Excellence” fundraising campaign that — along with proceeds from the inaugural gala and sponsorships — will support student scholarships.

“Ushering in a new era of leadership and excellence begins with ensuring every student who desires a quality education has access to one,” McNair noted. “We hope our alumni, friends and others who value the transformational power of education will invest in current and future generations of Tuskegee students — and tomorrow’s leaders.”

Information about each of the university’s inaugural-week events — as well as event sponsorships and how to contribute to the “Campaign for Leadership and Excellence” — is online at www.tuskegee.edu/inauguration.