The Department operates a low speed closed circuit wind tunnel facility with a 2' x 3' test section. The test section is equipped with a 6 component pyramidal balance. A computer-controlled 16-port solid- state pressure data acquisition is also available. This equipment is used for the aerodynamics laboratory class as well as for faculty and undergraduate research and design projects. 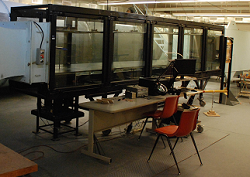 The Department also has a table-top version of the free surface water channel with a test section of 7in x 10in. This water channel that is used primarily for instructional purposes, has a sting balance as well as a dye injection system for flow visualization. Several experiments such a cylinder, delta wing etc. are available.

A state of the art volumetric PIV system is available for non-intrusive flow diagnostics. The system has interrogation volume of 140mm x 140mm x 100mm. The system uses two 200 mJ Nd-Yag pulsed lasers and a three 4MP cameras. The system has a spatial resolution of 3mm3.

Automatic Flight Controls Laboratory
Several experiments are available to students to strengthen their concepts of automatic controls and application to flight controls. These include:

(b) Hardware in the Loop (HITL) Facility

An HITL setup is used to teach concepts of automatic flight control. This setup consists of an arduino-based autopilot that is linked to the Matlab aerospace toolbox. An open-source  mission planner and X-plane is used for the simulation environment. Students implement the control algorithms on low cost UAVs. 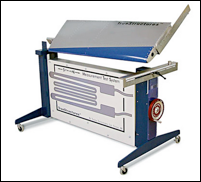 Flight Vehicle Design Laboratory
The laboratory has an array of computers running Windows for student course and project work, as well as for faculty research and curriculum development. Some of the computers were acquired by donations from alumni. The laboratory also has a large out-of-window flight simulation environment based on Micorsoft Flight simulator that is used for research as well as teaching aircraft performance, and stability and control. The various software packages available are Unigraphics NX, NASTRAN, Multifoil, Star CCM+, Matlab with Simulink and Aerospace Tool Box.
The Department also has a 6-node (4-processor/node) cluster computer that is used by students to learn computational fluid dynamics and structural mechanics in a parallel computational environment. 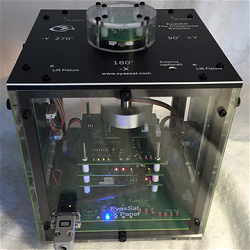 Model Fabrication Laboratory
This laboratory is used to build models for the wind tunnel, and is used as a shop for various student design projects, such as a radio-controlled airplane, a model for aircraft fuel tank and gauge, and an inverted V-tail for an aircraft design. The department is presently proposing to expand the capabilities of this laboratory to include structural testing of models.