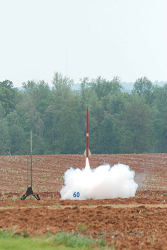 The NASA University Student Launch Initiative, or USLI, is a competition that challenges university-level students to design, build and fly a reusable rocket with scientific payload to one mile in altitude. The project engages students in scientific research and real-world engineering processes with NASA engineers. Students propose to participate in USLI during the fall. Once selected, teams design their rocket and payload throughout the school year. USLI requires a NASA review of the teams' preliminary and critical designs. The project also requires flight readiness and safety reviews before the rockets and payloads are approved for launch. After launch, teams complete a final report to include conclusions from their science experiment and the overall flight performance. The Preliminary Design Review, Critical Design Review, and Flight Readiness Review are conducted by panels of scientists and engineers from NASA and from NASA contractors and external partners.  (from USLI Web site). 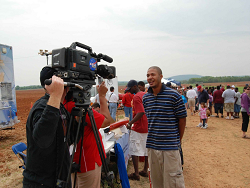 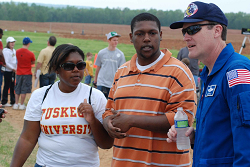 Students under the direction of Eldon Triggs constructed a model rocket and launched it at the SLI/USLI competition this year in Huntsville, AL.  Teammates from Tuskegee were: Chris Coleman, Raquel Faulkner, Myron Fletcher, Valerie Gordon, Jonathan Crayton, L'auren Anderson and Shawn Leonard.  The rocket flown used a L930 motor to propel the rocket to just below the targeted 5280 feet.  The payload created measured the temperature of the atmosphere as a function of altitude, the acceleration of the rocket as a function of time and, using the GPS, the wind drift of the rocket versus descent rate.  The payload also carried accelerometers and altimeters to trigger drogue and main parachutes.

The two days leading up to the launch were very busy.  NAR safety officers examined all rockets and payloads. Our group toured various experimental facilities at Marshall Space Flight Center(MSFC) including The Rocket Test Stand where the Saturn 5's F1 engine was tested and, a Human Factors lab where urine was converted back into drinkable water!  All of the SLI/USLI participants were able to display, and explain their designs to local engineers at a Rocket Fair at MSFC.  All participants at the launch followed NAR (National Association of Rocketry) safety code.  Faculty member Bruce Heath attended the launch.

Other pictures of Tuskegee Students in action can be seen at NASA's web site. 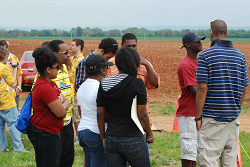