On Jan. 5, 1943, Dr. George Washington Carver died. He left behind a legacy as not only one of America's greatest inventors, but also as a pioneering agriculturalist, award-winning artist and humble humanitarian. 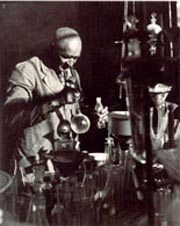 Enrolled at Simpson College to study piano and art

Arrived Oct. 8 at Tuskegee to be Agriculture Director

Initiated Jesup Wagon with T.M. Campbell, Sr. on May 24

Named Fellow, London Royal Society for the Encouragement of the Arts

Bronze bust of Carver unveiled on campus, a tribute from friends throughout the nation for his 40 years of creative research

His entire estate (over $60,000) was bequeathed to the George Washington Carver Foundation

Selected by Popular Mechanics as one of 50 outstanding Americans

*Adapted from The History of the Carver Research Foundation of Tuskegee University, 1940-1990 by B.D. Mayberry.