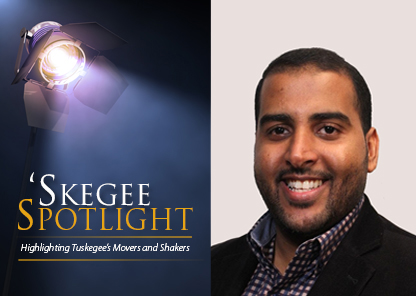 Born in Saudi Arabia, Alhelal first came to the United States as an ESL student attending Auburn University, but then transferred to Tuskegee after hearing about its mechanical engineering program. Currently, he is on a scholarship funded by the Saudi Arabian government, which he says has been a great benefit to him and his family.

“My dad was really instrumental in my decision to come to the United States. He told me, ‘you’re going to college in the states,’” Alhelal recalled. “There wasn’t much of a choice — I listened because I knew he wanted to prepare me for success.”

Alhelal recalls that pursuing a U.S.-based education made learning English vitally important to that success.

“I only knew 10 words when I first started the ESL program,” he said. “I was determined to learn English because it was a requirement to get into college.”

Alhelal says he was first introduced to Tuskegee by professors who encouraged him to look into Tuskegee’s degree programs. Eight years later, Alhelal holds both bachelor’s and master’s degrees in mechanical engineering from Tuskegee — and he says his experience has been ‘inspiring.’

“I didn’t know what Tuskegee was at the time, and I definitely didn’t know it was an HBCU and the meaning behind it,” he explained. “Since that time, I’ve been able to network with some of the brightest individuals and meet different people who have inspired me professionally.”

Recently, Alhelal was the only student panelist invited to present his research at the International Panel of the 46th Space Congress. There, he discussed his work involving a 3D-printed nanocarbon epoxy polymer composite, which he says could be used as a sustainability resource in the aerospace industry.

“Thanks to Gardner-Mathews Global Management, I had the opportunity to take Tuskegee to the world, and bring the world to Tuskegee, during the congress conference,” he notes. “I was able to introduce Tuskegee to so many people who had not known about the university, and I was excited about showing them the research work I’ve been doing as a student.”

Alhelal has also been a speaker at other conferences, including the 2018 Society for the Advancement of Materials and Process Engineering (SAMPE) — the largest conference of material science in North America.

Planning for life after Tuskegee

Alhelal says once he receives his Ph.D., his goal is to become an ambassador or work in academia — or both. He wants to continue blazing the path for Saudi nationals studying at HBCUs, particularly at Tuskegee.

“While here at Tuskegee, I’ve been able to accomplish so much, including helping launch the Saudi Arabian student organization on campus. It's important to feel like you’re at home, and Tuskegee has been just that for me,” he noted.

Alhelal says he also wanted to continue informing others about opportunities at Tuskegee. He already has two brothers who are following in his footsteps.

“My brothers are also enrolled in the university, and I couldn’t be more proud of them for listening and trusting the process. I know that they will do very well,” he said.